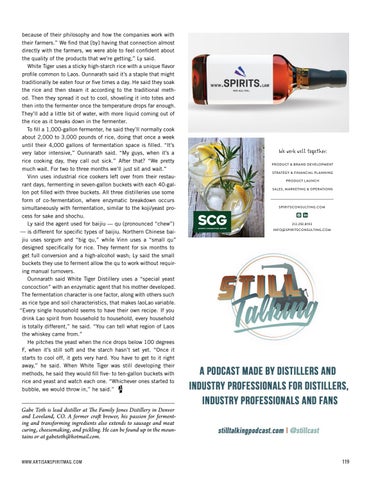 because of their philosophy and how the companies work with their farmers.” We find that [by] having that connection almost directly with the farmers, we were able to feel confident about the quality of the products that we’re getting,” Ly said. White Tiger uses a sticky high-starch rice with a unique flavor profile common to Laos. Ounnarath said it’s a staple that might traditionally be eaten four or five times a day. He said they soak the rice and then steam it according to the traditional method. Then they spread it out to cool, shoveling it into totes and then into the fermenter once the temperature drops far enough. They’ll add a little bit of water, with more liquid coming out of the rice as it breaks down in the fermenter. To fill a 1,000-gallon fermenter, he said they’ll normally cook about 2,000 to 3,000 pounds of rice, doing that once a week until their 4,000 gallons of fermentation space is filled. “It’s very labor intensive,” Ounnarath said. “My guys, when it’s a rice cooking day, they call out sick.” After that? “We pretty much wait. For two to three months we’ll just sit and wait.” Vinn uses industrial rice cookers left over from their restaurant days, fermenting in seven-gallon buckets with each 40-gallon pot filled with three buckets. All three distilleries use some We work well together. form of co-fermentation, where enzymatic breakdown occurs simultaneously with fermentation, similar to the koji/yeast process for sake and shochu. Ly said the agent used for baijiu — qu (pronounced “chew”) — is different for specific types of baijiu. Northern Chinese baijiu uses sorgum and “big qu,” while Vinn uses a “small qu” designed specifically for rice. They ferment for six months to get full conversion and a high-alcohol wash; Ly said the small buckets they use to ferment allow the qu to work without requiring manual turnovers. Ounnarath said White Tiger Distillery uses a “special yeast concoction” with an enzymatic agent that his mother developed. The fermentation character is one factor, along with others such as rice type and soil characteristics, that makes laoLao variable. “Every single household seems to have their own recipe. If you drink Lao spirit from household to household, every household is totally different,” he said. “You can tell what region of Laos the whiskey came from.” He pitches the yeast when the rice drops below 100 degrees F, when it’s still soft and the starch hasn’t set yet. “Once it starts to cool off, it gets very hard. You have to get to it right away,” he said. When White Tiger was still developing their methods, he said they would fill five- to ten-gallon buckets with rice and yeast and watch each one. “Whichever ones started to bubble, we would throw in,” he said.”

Gabe Toth is lead distiller at The Family Jones Distillery in Denver and Loveland, CO. A former craft brewer, his passion for fermenting and transforming ingredients also extends to sausage and meat curing, cheesemaking, and pickling. He can be found up in the mountains or at gabetoth@hotmail.com.