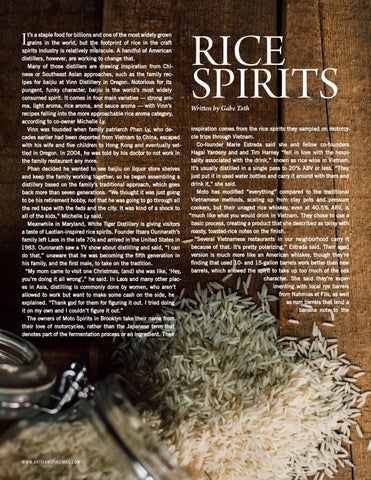 t’s a staple food for billions and one of the most widely grown grains in the world, but the footprint of rice in the craft spirits industry is relatively miniscule. A handful of American distillers, however, are working to change that. Many of those distillers are drawing inspiration from Chinese or Southeast Asian approaches, such as the family recipes for baijiu at Vinn Distillery in Oregon. Notorious for its pungent, funky character, baijiu is the world’s most widely consumed spirit. It comes in four main varieties — strong aroma, light aroma, rice aroma, and sauce aroma — with Vinn’s recipes falling into the more approachable rice aroma category, according to co-owner Michelle Ly. Vinn was founded when family patriarch Phan Ly, who decades earlier had been deported from Vietnam to China, escaped with his wife and five children to Hong Kong and eventually settled in Oregon. In 2004, he was told by his doctor to not work in the family restaurant any more. Phan decided he wanted to see baijiu on liquor store shelves and keep the family working together, so he began assembling a distillery based on the family’s traditional approach, which goes back more than seven generations. “We thought it was just going to be his retirement hobby, not that he was going to go through all the red tape with the feds and the city. It was kind of a shock to all of the kids,” Michelle Ly said. Meanwhile in Maryland, White Tiger Distillery is giving visitors a taste of Laotian-inspired rice spirits. Founder Itsara Ounnarath’s family left Laos in the late 70s and arrived in the United States in 1983. Ounnarath saw a TV show about distilling and said, “I can do that,” unaware that he was becoming the fifth generation in his family, and the first male, to take on the tradition. “My mom came to visit one Christmas, (and) she was like, ‘Hey, you’re doing it all wrong’,” he said. In Laos and many other places in Asia, distilling is commonly done by women, who aren’t allowed to work but want to make some cash on the side, he explained. “Thank god for them for figuring it out. I tried doing it on my own and I couldn’t figure it out.” The owners of Moto Spirits in Brooklyn take their name from their love of motorcycles, rather than the Japanese term that denotes part of the fermentation process or an ingredient. Their

inspiration comes from the rice spirits they sampled on motorcycle trips through Vietnam. Co-founder Marie Estrada said she and fellow co-founders Hagai Yardeny and and Tim Harney “fell in love with the hospitality associated with the drink,” known as rice wine in Vietnam. It’s usually distilled in a single pass to 20% ABV or less. “They just put it in used water bottles and carry it around with them and drink it,” she said. Moto has modified “everything” compared to the traditional Vietnamese methods, scaling up from clay pots and pressure cookers, but their unaged rice whiskey, even at 40.5% ABV, is “much like what you would drink in Vietnam. They chose to use a basic process, creating a product that she described as tailsy with roasty, toasted-rice notes on the finish. “Several Vietnamese restaurants in our neighborhood carry it because of that. It’s pretty polarizing,” Estrada said. Their aged version is much more like an American whiskey, though they’re finding that used 10- and 15-gallon barrels work better than new barrels, which allowed the spirit to take up too much of the oak character. She said they’re experimenting with local rye barrels from Nahmias et Fils, as well as rum barrels that lend a banana note to the