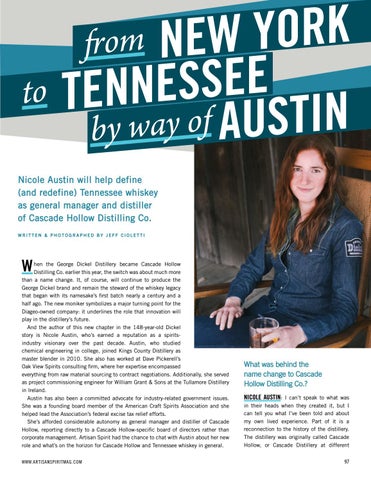 hen the George Dickel Distillery became Cascade Hollow Distilling Co. earlier this year, the switch was about much more than a name change. It, of course, will continue to produce the George Dickel brand and remain the steward of the whiskey legacy that began with its namesake’s first batch nearly a century and a half ago. The new moniker symbolizes a major turning point for the Diageo-owned company: it underlines the role that innovation will play in the distillery’s future. And the author of this new chapter in the 148-year-old Dickel story is Nicole Austin, who’s earned a reputation as a spiritsindustry visionary over the past decade. Austin, who studied chemical engineering in college, joined Kings County Distillery as master blender in 2010. She also has worked at Dave Pickerell’s Oak View Spirits consulting firm, where her expertise encompassed everything from raw material sourcing to contract negotiations. Additionally, she served as project commissioning engineer for William Grant & Sons at the Tullamore Distillery in Ireland. Austin has also been a committed advocate for industry-related government issues. She was a founding board member of the American Craft Spirits Association and she helped lead the Association’s federal excise tax relief efforts. She’s afforded considerable autonomy as general manager and distiller of Cascade Hollow, reporting directly to a Cascade Hollow-specific board of directors rather than corporate management. Artisan Spirit had the chance to chat with Austin about her new role and what’s on the horizon for Cascade Hollow and Tennessee whiskey in general.

What was behind the name change to Cascade Hollow Distilling Co.? NICOLE AUSTIN: I can’t speak to what was in their heads when they created it, but I can tell you what I’ve been told and about my own lived experience. Part of it is a reconnection to the history of the distillery. The distillery was originally called Cascade Hollow, or Cascade Distillery at different