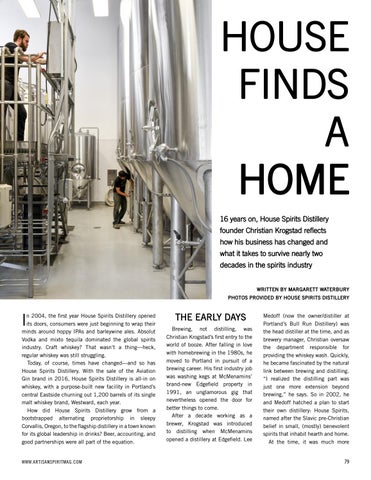 HOUSE FINDS A HOME 16 years on, House Spirits Distillery founder Christian Krogstad reflects how his business has changed and what it takes to survive nearly two decades in the spirits industry WRITTEN BY MARGARETT WATERBURY PHOTOS PROVIDED BY HOUSE SPIRITS DISTILLERY

n 2004, the first year House Spirits Distillery opened its doors, consumers were just beginning to wrap their minds around hoppy IPAs and barleywine ales. Absolut Vodka and mixto tequila dominated the global spirits industry. Craft whiskey? That wasn’t a thing—heck, regular whiskey was still struggling. Today, of course, times have changed—and so has House Spirits Distillery. With the sale of the Aviation Gin brand in 2016, House Spirits Distillery is all-in on whiskey, with a purpose-built new facility in Portland’s central Eastside churning out 1,200 barrels of its single malt whiskey brand, Westward, each year. How did House Spirits Distillery grow from a bootstrapped alternating proprietorship in sleepy Corvallis, Oregon, to the flagship distillery in a town known for its global leadership in drinks? Beer, accounting, and good partnerships were all part of the equation.

THE EARLY DAYS Brewing, not distilling, was Christian Krogstad’s first entry to the world of booze. After falling in love with homebrewing in the 1980s, he moved to Portland in pursuit of a brewing career. His first industry job was washing kegs at McMenamins’ brand-new Edgefield property in 1991, an unglamorous gig that nevertheless opened the door for better things to come. After a decade working as a brewer, Krogstad was introduced to distilling when McMenamins opened a distillery at Edgefield. Lee

Medoff (now the owner/distiller at Portland’s Bull Run Distillery) was the head distiller at the time, and as brewery manager, Christian oversaw the department responsible for providing the whiskey wash. Quickly, he became fascinated by the natural link between brewing and distilling. “I realized the distilling part was just one more extension beyond brewing,” he says. So in 2002, he and Medoff hatched a plan to start their own distillery: House Spirits, named after the Slavic pre-Christian belief in small, (mostly) benevolent spirits that inhabit hearth and home. At the time, it was much more