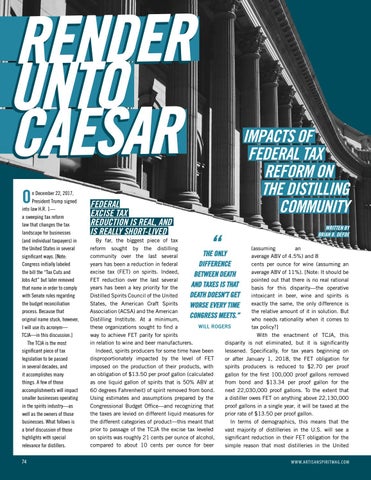 n December 22, 2017, President Trump signed into law H.R. 1— a sweeping tax reform law that changes the tax landscape for businesses (and individual taxpayers) in the United States in several significant ways. [Note: Congress initially labeled the bill the “Tax Cuts and Jobs Act” but later removed that name in order to comply with Senate rules regarding the budget reconciliation process. Because that original name stuck, however, I will use its acronym— TCJA—in this discussion.] The TCJA is the most significant piece of tax legislation to be passed in several decades, and it accomplishes many things. A few of those accomplishments will impact smaller businesses operating in the spirits industry—as well as the owners of those businesses. What follows is a brief discussion of those highlights with special relevance for distillers.

FEDERAL EXCISE TAX REDUCTION IS REAL, AND IS REALLY SHORT-LIVED

IMPACTS OF FEDERAL TAX REFORM ON THE DISTILLING COMMUNITY

WRITTEN BY BRIAN B. DEFOE

By far, the biggest piece of tax reform sought by the distilling (assuming an THE ONLY community over the last several average ABV of 4.5%) and 8 years has been a reduction in federal cents per ounce for wine (assuming an DIFFERENCE excise tax (FET) on spirits. Indeed, average ABV of 11%). [Note: It should be BETWEEN DEATH FET reduction over the last several pointed out that there is no real rational AND TAXES IS THAT years has been a key priority for the basis for this disparity—the operative DEATH DOESN’T GET Distilled Spirits Council of the United intoxicant in beer, wine and spirits is States, the American Craft Spirits exactly the same, the only difference is WORSE EVERY TIME Association (ACSA) and the American the relative amount of it in solution. But CONGRESS MEETS.” Distilling Institute. At a minimum, who needs rationality when it comes to WILL ROGERS these organizations sought to find a tax policy?] way to achieve FET parity for spirits With the enactment of TCJA, this in relation to wine and beer manufacturers. disparity is not eliminated, but it is significantly Indeed, spirits producers for some time have been lessened. Specifically, for tax years beginning on disproportionately impacted by the level of FET or after January 1, 2018, the FET obligation for imposed on the production of their products, with spirits producers is reduced to $2.70 per proof an obligation of $13.50 per proof gallon (calculated gallon for the first 100,000 proof gallons removed as one liquid gallon of spirits that is 50% ABV at from bond and $13.34 per proof gallon for the 60 degrees Fahrenheit) of spirit removed from bond. next 22,030,000 proof gallons. To the extent that Using estimates and assumptions prepared by the a distiller owes FET on anything above 22,130,000 Congressional Budget Office—and recognizing that proof gallons in a single year, it will be taxed at the the taxes are levied on different liquid measures for prior rate of $13.50 per proof gallon. the different categories of product—this meant that In terms of demographics, this means that the prior to passage of the TCJA the excise tax leveled vast majority of distilleries in the U.S. will see a on spirits was roughly 21 cents per ounce of alcohol, significant reduction in their FET obligation for the compared to about 10 cents per ounce for beer simple reason that most distilleries in the United