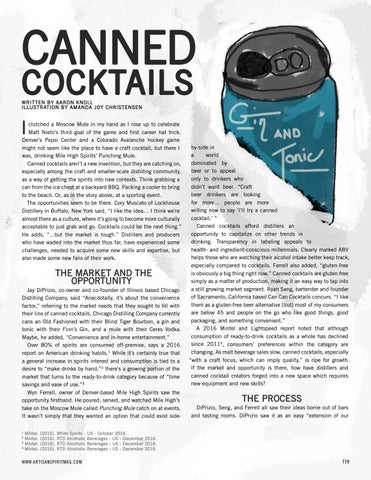 clutched a Moscow Mule in my hand as I rose up to celebrate Matt Nieto’s third goal of the game and first career hat trick. Denver’s Pepsi Center and a Colorado Avalanche hockey game might not seem like the place to have a craft cocktail, but there I was, drinking Mile High Spirits’ Punching Mule. Canned cocktails aren’t a new invention, but they are catching on, especially among the craft and smaller-scale distilling community, as a way of getting the spirits into new contexts. Think grabbing a can from the ice chest at a backyard BBQ. Packing a cooler to bring to the beach. Or, as in the story above, at a sporting event. The opportunities seem to be there. Cory Muscato of Lockhouse Distillery in Buffalo, New York said, “I like the idea… I think we're almost there as a culture, where it’s going to become more culturally acceptable to just grab and go. Cocktails could be the next thing.” He adds, “...but the market is tough.” Distillers and producers who have waded into the market thus far, have experienced some challenges, needed to acquire some new skills and expertise, but also made some new fans of their work.

THE MARKET AND THE OPPORTUNITY Jay DiPrizio, co-owner and co-founder of Illinois based Chicago Distilling Company, said “Anecdotally, it’s about the convenience factor,” referring to the market needs that they sought to fill with their line of canned cocktails. Chicago Distilling Company currently cans an Old Fashioned with their Blind Tiger Bourbon, a gin and tonic with their Finn’s Gin, and a mule with their Ceres Vodka. Maybe, he added, “Convenience and in-home entertainment.” Over 80% of spirits are consumed off-premise, says a 2016 report on American drinking habits.1 While it’s certainly true that a general increase in spirits interest and consumption is tied to a desire to “make drinks by hand,”2 there’s a growing portion of the market that turns to the ready-to-drink category because of “time savings and ease of use.”3 Wyn Ferrell, owner of Denver-based Mile High Spirits saw the opportunity firsthand. He poured, served, and watched Mile High’s take on the Moscow Mule called Punching Mule catch on at events. It wasn’t simply that they wanted an option that could exist side1 2 3 4

by-side in a world dominated by beer or to appeal only to drinkers who didn’t want beer. “Craft beer drinkers are looking for more… people are more willing now to say ‘I’ll try a canned cocktail.’ ” Canned cocktails afford distillers an opportunity to capitalize on other trends in drinking. Transparency in labeling appeals to health- and ingredient-conscious millennials. Clearly marked ABV helps those who are watching their alcohol intake better keep track, especially compared to cocktails. Ferrell also added, “gluten-free is obviously a big thing right now.” Canned cocktails are gluten free simply as a matter of production, making it an easy way to tap into a still growing market segment. Ryan Seng, bartender and founder of Sacramento, California based Can Can Cocktails concurs. “I like them as a gluten-free beer alternative [but] most of my consumers are below 45 and people on the go who like good things, good packaging, and something convenient.” A 2016 Mintel and Lightspeed report noted that although consumption of ready-to-drink cocktails as a whole has declined since 20114, consumers’ preferences within the category are changing. As malt beverage sales slow, canned cocktails, especially “with a craft focus, which can imply quality,” is ripe for growth. If the market and opportunity is there, how have distillers and canned cocktail creators forged into a new space which requires new equipment and new skills?

THE PROCESS DiPrizio, Seng, and Ferrell all saw their ideas borne out of bars and tasting rooms. DiPrizio saw it as an easy “extension of our