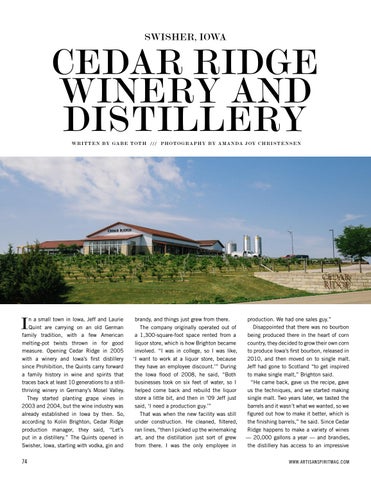 n a small town in Iowa, Jeff and Laurie Quint are carrying on an old German family tradition, with a few American melting-pot twists thrown in for good measure. Opening Cedar Ridge in 2005 with a winery and Iowa’s first distillery since Prohibition, the Quints carry forward a family history in wine and spirits that traces back at least 10 generations to a stillthriving winery in Germany’s Mosel Valley. They started planting grape vines in 2003 and 2004, but the wine industry was already established in Iowa by then. So, according to Kolin Brighton, Cedar Ridge production manager, they said, “Let’s put in a distillery.” The Quints opened in Swisher, Iowa, starting with vodka, gin and

brandy, and things just grew from there. The company originally operated out of a 1,300-square-foot space rented from a liquor store, which is how Brighton became involved. “I was in college, so I was like, ‘I want to work at a liquor store, because they have an employee discount.’” During the Iowa flood of 2008, he said, “Both businesses took on six feet of water, so I helped come back and rebuild the liquor store a little bit, and then in ’09 Jeff just said, ‘I need a production guy.’” That was when the new facility was still under construction. He cleaned, filtered, ran lines, “then I picked up the winemaking art, and the distillation just sort of grew from there. I was the only employee in

production. We had one sales guy.” Disappointed that there was no bourbon being produced there in the heart of corn country, they decided to grow their own corn to produce Iowa’s first bourbon, released in 2010, and then moved on to single malt. Jeff had gone to Scotland “to get inspired to make single malt,” Brighton said. “He came back, gave us the recipe, gave us the techniques, and we started making single malt. Two years later, we tasted the barrels and it wasn’t what we wanted, so we figured out how to make it better, which is the finishing barrels,” he said. Since Cedar Ridge happens to make a variety of wines — 20,000 gallons a year — and brandies, the distillery has access to an impressive WWW.ARTISANSPIRITMAG.COM