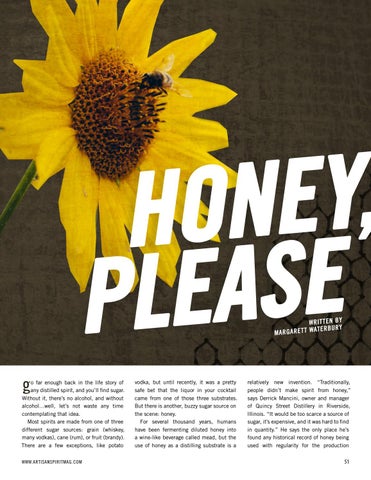 o far enough back in the life story of any distilled spirit, and you’ll find sugar. Without it, there’s no alcohol, and without alcohol…well, let’s not waste any time contemplating that idea. Most spirits are made from one of three different sugar sources: grain (whiskey, many vodkas), cane (rum), or fruit (brandy). There are a few exceptions, like potato WWW.ARTISANSPIRITMAG.COM

vodka, but until recently, it was a pretty safe bet that the liquor in your cocktail came from one of those three substrates. But there is another, buzzy sugar source on the scene: honey. For several thousand years, humans have been fermenting diluted honey into a wine-like beverage called mead, but the use of honey as a distilling substrate is a

relatively new invention. “Traditionally, people didn’t make spirit from honey,” says Derrick Mancini, owner and manager of Quincy Street Distillery in Riverside, Illinois. “It would be too scarce a source of sugar, it’s expensive, and it was hard to find in quantity.” He says the only place he’s found any historical record of honey being used with regularity for the production