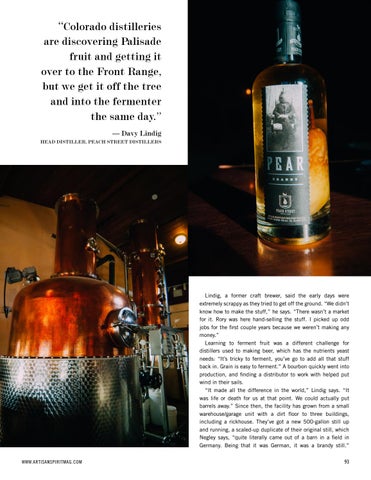 “Colorado distilleries are discovering Palisade fruit and getting it over to the Front Range, but we get it off the tree and into the fermenter the same day.” — Davy Lindig HEAD DISTILLER, PEACH STREET DISTILLERS

Lindig, a former craft brewer, said the early days were extremely scrappy as they tried to get off the ground. “We didn’t know how to make the stuff,” he says. “There wasn’t a market for it. Rory was here hand-selling the stuff. I picked up odd jobs for the first couple years because we weren’t making any money.” Learning to ferment fruit was a different challenge for distillers used to making beer, which has the nutrients yeast needs: “It’s tricky to ferment, you’ve go to add all that stuff back in. Grain is easy to ferment.” A bourbon quickly went into production, and finding a distributor to work with helped put wind in their sails. “It made all the difference in the world,” Lindig says. “It was life or death for us at that point. We could actually put barrels away.” Since then, the facility has grown from a small warehouse/garage unit with a dirt floor to three buildings, including a rickhouse. They’ve got a new 500-gallon still up and running, a scaled-up duplicate of their original still, which Negley says, “quite literally came out of a barn in a field in Germany. Being that it was German, it was a brandy still.” WWW.ARTISANSPIRITMAG.COM