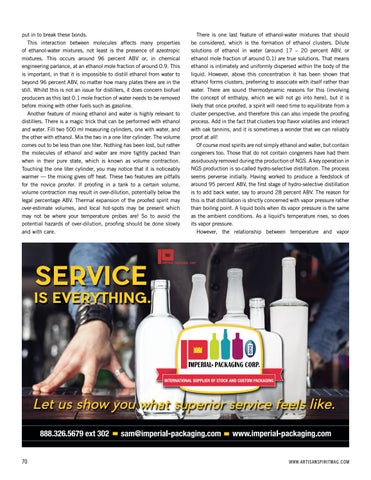 put in to break these bonds. This interaction between molecules affects many properties of ethanol-water mixtures, not least is the presence of azeotropic mixtures. This occurs around 96 percent ABV or, in chemical engineering parlance, at an ethanol mole fraction of around 0.9. This is important, in that it is impossible to distill ethanol from water to beyond 96 percent ABV, no matter how many plates there are in the still. Whilst this is not an issue for distillers, it does concern biofuel producers as this last 0.1 mole fraction of water needs to be removed before mixing with other fuels such as gasoline. Another feature of mixing ethanol and water is highly relevant to distillers. There is a magic trick that can be performed with ethanol and water. Fill two 500 ml measuring cylinders, one with water, and the other with ethanol. Mix the two in a one liter cylinder. The volume comes out to be less than one liter. Nothing has been lost, but rather the molecules of ethanol and water are more tightly packed than when in their pure state, which is known as volume contraction. Touching the one liter cylinder, you may notice that it is noticeably warmer — the mixing gives off heat. These two features are pitfalls for the novice proofer. If proofing in a tank to a certain volume, volume contraction may result in over-dilution, potentially below the legal percentage ABV. Thermal expansion of the proofed spirit may over-estimate volumes, and local hot-spots may be present which may not be where your temperature probes are! So to avoid the potential hazards of over-dilution, proofing should be done slowly and with care.

There is one last feature of ethanol-water mixtures that should be considered, which is the formation of ethanol clusters. Dilute solutions of ethanol in water (around 17 – 20 percent ABV, or ethanol mole fraction of around 0.1) are true solutions. That means ethanol is intimately and uniformly dispersed within the body of the liquid. However, above this concentration it has been shown that ethanol forms clusters, preferring to associate with itself rather than water. There are sound thermodynamic reasons for this (involving the concept of enthalpy, which we will not go into here), but it is likely that once proofed, a spirit will need time to equilibrate from a cluster perspective, and therefore this can also impede the proofing process. Add in the fact that clusters trap flavor volatiles and interact with oak tannins, and it is sometimes a wonder that we can reliably proof at all! Of course most spirits are not simply ethanol and water, but contain congeners too. Those that do not contain congeners have had them assiduously removed during the production of NGS. A key operation in NGS production is so-called hydro-selective distillation. The process seems perverse initially. Having worked to produce a feedstock of around 95 percent ABV, the first stage of hydro-selective distillation is to add back water, say to around 28 percent ABV. The reason for this is that distillation is strictly concerned with vapor pressure rather than boiling point. A liquid boils when its vapor pressure is the same as the ambient conditions. As a liquid’s temperature rises, so does its vapor pressure. However, the relationship between temperature and vapor

Let us show you what superior service feels like.