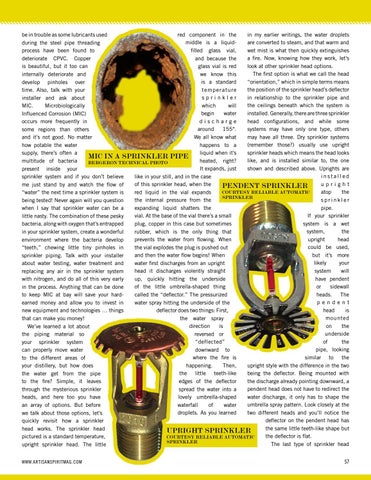 in my earlier writings, the water droplets red component in the be in trouble as some lubricants used are converted to steam, and that warm and middle is a liquidduring the steel pipe threading wet mist is what then quickly extinguishes filled glass vial, process have been found to a fire. Now, knowing how they work, let’s and because the deteriorate CPVC. Copper look at other sprinkler head options. glass vial is red is beautiful, but it too can The first option is what we call the head we know this internally deteriorate and “orientation,” which in simple terms means is a standard develop pinholes over the position of the sprinkler head’s deflector temperature time. Also, talk with your in relationship to the sprinkler pipe and sprinkler installer and ask about the ceilings beneath which the system is which will MIC. Microbiologically installed. Generally, there are three sprinkler begin water Influenced Corrosion (MIC) head configurations, and while some discharge occurs more frequently in systems may have only one type, others around 155°. some regions than others may have all three. Dry sprinkler systems We all know what and it’s not good. No matter (remember those?) usually use upright happens to a how potable the water sprinkler heads which means the head looks liquid when it’s supply, there’s often a MIC IN A SPRINKLER PIPE like, and is installed similar to, the one heated, right? multitude of bacteria BERGERON TECHNICAL PHOTO shown and described above. Uprights are It expands, just present inside your installed like in your still, and in the case sprinkler system and if you don’t believe upright of this sprinkler head, when the me just stand by and watch the flow of PENDENT SPRINKLER COURTESY RELIABLE AUTOMATIC atop the red liquid in the vial expands “water” the next time a sprinkler system is SPRINKLER sprinkler the internal pressure from the being tested! Never again will you question pipe. expanding liquid shatters the when I say that sprinkler water can be a If your sprinkler vial. At the base of the vial there’s a small little nasty. The combination of these pesky system is a wet plug, copper in this case but sometimes bacteria, along with oxygen that’s entrapped system, the rubber, which is the only thing that in your sprinkler system, create a wonderful upright head prevents the water from flowing. When environment where the bacteria develop could be used, the vial explodes the plug is pushed out “teeth,” chewing little tiny pinholes in but it’s more and then the water flow begins! When sprinkler piping. Talk with your installer likely your water first discharges from an upright about water testing, water treatment and system will head it discharges violently straight replacing any air in the sprinkler system have pendent up, quickly hitting the underside with nitrogen, and do all of this very early or sidewall of the little umbrella-shaped thing in the process. Anything that can be done heads. The called the “deflector.” The pressurized to keep MIC at bay will save your hardpendent water spray hitting the underside of the earned money and allow you to invest in head is deflector does two things: First, new equipment and technologies … things mounted the water spray that can make you money! on the direction is We’ve learned a lot about underside reversed or the piping material so of the “deflected” your sprinkler system pipe, looking downward to can properly move water similar to the where the fire is to the different areas of upright style with the difference in the two happening. Then, your distillery, but how does being the deflector. Being mounted with the little teeth-like the water get from the pipe the discharge already pointing downward, a edges of the deflector to the fire? Simple, it leaves pendent head does not have to redirect the spread the water into a through the mysterious sprinkler water discharge, it only has to shape the lovely umbrella-shaped heads, and here too you have umbrella spray pattern. Look closely at the waterfall of water an array of options. But before two different heads and you’ll notice the droplets. As you learned we talk about those options, let’s deflector on the pendent head has quickly revisit how a sprinkler the same little teeth-like shape but head works. The sprinkler head UPRIGHT SPRINKLER the deflector is flat. pictured is a standard temperature, COURTESY RELIABLE AUTOMATIC SPRINKLER The last type of sprinkler head upright sprinkler head. The little WWW.ARTISANSPIRITMAG.COM