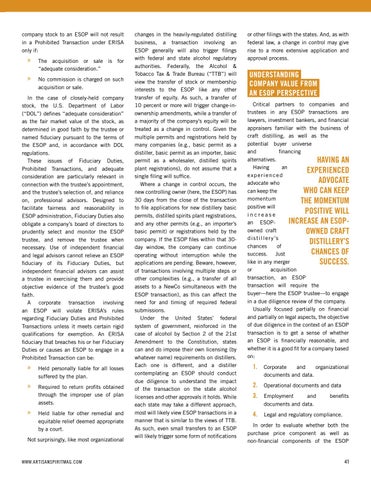 company stock to an ESOP will not result in a Prohibited Transaction under ERISA only if:

The acquisition or sale is for “adequate consideration.”

No commission is charged on such acquisition or sale.

In the case of closely-held company stock, the U.S. Department of Labor (“DOL”) defines “adequate consideration” as the fair market value of the stock, as determined in good faith by the trustee or named fiduciary pursuant to the terms of the ESOP and, in accordance with DOL regulations. These issues of Fiduciary Duties, Prohibited Transactions, and adequate consideration are particularly relevant in connection with the trustee’s appointment, and the trustee’s selection of, and reliance on, professional advisors. Designed to facilitate fairness and reasonability in ESOP administration, Fiduciary Duties also obligate a company’s board of directors to prudently select and monitor the ESOP trustee, and remove the trustee when necessary. Use of independent financial and legal advisors cannot relieve an ESOP fiduciary of its Fiduciary Duties, but independent financial advisors can assist a trustee in exercising them and provide objective evidence of the trustee’s good faith. A corporate transaction involving an ESOP will violate ERISA’s rules regarding Fiduciary Duties and Prohibited Transactions unless it meets certain rigid qualifications for exemption. An ERISA fiduciary that breaches his or her Fiduciary Duties or causes an ESOP to engage in a Prohibited Transaction can be:

Held personally liable for all losses suffered by the plan.

Required to return profits obtained through the improper use of plan assets.

Held liable for other remedial and equitable relief deemed appropriate by a court.

changes in the heavily-regulated distilling business, a transaction involving an ESOP generally will also trigger filings with federal and state alcohol regulatory authorities. Federally, the Alcohol & Tobacco Tax & Trade Bureau (“TTB”) will view the transfer of stock or membership interests to the ESOP like any other transfer of equity. As such, a transfer of 10 percent or more will trigger change-inownership amendments, while a transfer of a majority of the company’s equity will be treated as a change in control. Given the multiple permits and registrations held by many companies (e.g., basic permit as a distiller, basic permit as an importer, basic permit as a wholesaler, distilled spirits plant registrations), do not assume that a single filing will suffice. Where a change in control occurs, the new controlling owner (here, the ESOP) has 30 days from the close of the transaction to file applications for new distillery basic permits, distilled spirits plant registrations, and any other permits (e.g., an importer’s basic permit) or registrations held by the company. If the ESOP files within that 30day window, the company can continue operating without interruption while the applications are pending. Beware, however, of transactions involving multiple steps or other complexities (e.g., a transfer of all assets to a NewCo simultaneous with the ESOP transaction), as this can affect the need for and timing of required federal submissions. Under the United States’ federal system of government, reinforced in the case of alcohol by Section 2 of the 21st Amendment to the Constitution, states can and do impose their own licensing (by whatever name) requirements on distillers. Each one is different, and a distiller contemplating an ESOP should conduct due diligence to understand the impact of the transaction on the state alcohol licenses and other approvals it holds. While each state may take a different approach, most will likely view ESOP transactions in a manner that is similar to the views of TTB. As such, even small transfers to an ESOP will likely trigger some form of notifications

or other filings with the states. And, as with federal law, a change in control may give rise to a more extensive application and approval process.

UNDERSTANDING COMPANY VALUE FROM AN ESOP PERSPECTIVE Critical partners to companies and trustees in any ESOP transactions are lawyers, investment bankers, and financial appraisers familiar with the business of craft distilling, as well as the potential buyer universe and financing alternatives. HAVING AN Having an EXPERIENCED experienced ADVOCATE advocate who can keep the WHO CAN KEEP momentum THE MOMENTUM positive will POSITIVE WILL increase INCREASE AN ESOPan ESOPowned craft OWNED CRAFT d i s t i l l e r y ’s DISTILLERY’S chances of CHANCES OF success. Just like in any merger SUCCESS. or acquisition transaction, an ESOP transaction will require the buyer—here the ESOP trustee—to engage in a due diligence review of the company. Usually focused partially on financial and partially on legal aspects, the objective of due diligence in the context of an ESOP transaction is to get a sense of whether an ESOP is financially reasonable, and whether it is a good fit for a company based on:

and organizational documents and data.

and documents and data.

4. Legal and regulatory compliance. In order to evaluate whether both the purchase price component as well as non-financial components of the ESOP