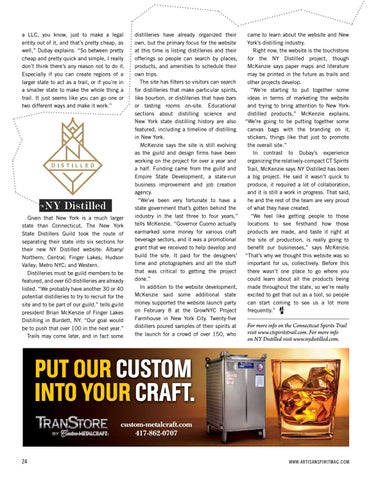 a LLC, you know, just to make a legal entity out of it, and that’s pretty cheap, as well,” Dubay explains. “So between pretty cheap and pretty quick and simple, I really don’t think there’s any reason not to do it. Especially if you can create regions of a larger state to act as a trail, or if you’re in a smaller state to make the whole thing a trail. It just seems like you can go one or two different ways and make it work.”

NY Distilled Given that New York is a much larger state than Connecticut, The New York State Distillers Guild took the route of separating their state into six sections for their new NY Distilled website: Albany/ Northern; Central; Finger Lakes; Hudson Valley; Metro NYC; and Western. Distilleries must be guild members to be featured, and over 60 distilleries are already listed. “We probably have another 30 or 40 potential distilleries to try to recruit for the site and to be part of our guild,” tells guild president Brian McKenzie of Finger Lakes Distilling in Burdett, NY. “Our goal would be to push that over 100 in the next year.” Trails may come later, and in fact some

distilleries have already organized their own, but the primary focus for the website at this time is listing distilleries and their offerings so people can search by places, products, and amenities to schedule their own trips. The site has filters so visitors can search for distilleries that make particular spirits, like bourbon, or distilleries that have bars or tasting rooms on-site. Educational sections about distilling science and New York state distilling history are also featured, including a timeline of distilling in New York. McKenzie says the site is still evolving as the guild and design firms have been working on the project for over a year and a half. Funding came from the guild and Empire State Development, a state-run business improvement and job creation agency. “We’ve been very fortunate to have a state government that’s gotten behind the industry in the last three to four years,” tells McKenzie. “Governor Cuomo actually earmarked some money for various craft beverage sectors, and it was a promotional grant that we received to help develop and build the site. It paid for the designers’ time and photographers and all the stuff that was critical to getting the project done.” In addition to the website development, McKenzie said some additional state money supported the website launch party on February 8 at the GrowNYC Project Farmhouse in New York City. Twenty-five distillers poured samples of their spirits at the launch for a crowd of over 150, who

came to learn about the website and New York’s distilling industry. Right now, the website is the touchstone for the NY Distilled project, though McKenzie says paper maps and literature may be printed in the future as trails and other projects develop. “We’re starting to put together some ideas in terms of marketing the website and trying to bring attention to New Yorkdistilled products,” McKenzie explains. “We’re going to be putting together some canvas bags with the branding on it, stickers, things like that just to promote the overall site.” In contrast to Dubay’s experience organizing the relatively-compact CT Spirits Trail, McKenzie says NY Distilled has been a big project. He said it wasn’t quick to produce, it required a lot of collaboration, and it is still a work in progress. That said, he and the rest of the team are very proud of what they have created. “We feel like getting people to those locations to see firsthand how those products are made, and taste it right at the site of production, is really going to benefit our businesses,” says McKenzie. “That’s why we thought this website was so important for us, collectively. Before this there wasn’t one place to go where you could learn about all the products being made throughout the state, so we’re really excited to get that out as a tool, so people can start coming to see us a lot more frequently.”