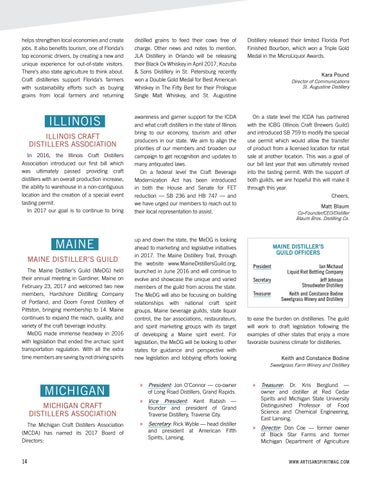 ILLINOIS ILLINOIS CRAFT DISTILLERS ASSOCIATION In 2016, the Illinois Craft Distillers Association introduced our first bill which was ultimately passed providing craft distillers with an overall production increase, the ability to warehouse in a non-contiguous location and the creation of a special event tasting permit. In 2017 our goal is to continue to bring

MAINE MAINE DISTILLER’S GUILD The Maine Distiller’s Guild (MeDG) held their annual meeting in Gardiner, Maine on February 23, 2017 and welcomed two new members, Hardshore Distilling Company of Portland, and Doom Forest Distillery of Pittston, bringing membership to 14. Maine continues to expand the reach, quality, and variety of the craft beverage industry. MeDG made immense headway in 2016 with legislation that ended the archaic spirit transportation regulation. With all the extra time members are saving by not driving spirits

distilled grains to feed their cows free of charge. Other news and notes to mention, JLA Distillery in Orlando will be releasing their Black Ox Whiskey in April 2017, Kozuba & Sons Distillery in St. Petersburg recently won a Double Gold Medal for Best American Whiskey in The Fifty Best for their Prologue Single Malt Whiskey, and St. Augustine

awareness and garner support for the ICDA and what craft distillers in the state of Illinois bring to our economy, tourism and other producers in our state. We aim to align the priorities of our members and broaden our campaign to get recognition and updates to many antiquated laws. On a federal level the Craft Beverage Modernization Act has been introduced in both the House and Senate for FET reduction — SB 236 and HB 747 — and we have urged our members to reach out to their local representation to assist.

On a state level the ICDA has partnered with the ICBG (Illinois Craft Brewers Guild) and introduced SB 759 to modify the special use permit which would allow the transfer of product from a licensed location for retail sale at another location. This was a goal of our bill last year that was ultimately revised into the tasting permit. With the support of both guilds, we are hopeful this will make it through this year. Cheers,

up and down the state, the MeDG is looking ahead to marketing and legislative initiatives in 2017. The Maine Distillery Trail, through the website www.MaineDistillersGuild.org, launched in June 2016 and will continue to evolve and showcase the unique and varied members of the guild from across the state. The MeDG will also be focusing on building relationships with national craft spirit groups, Maine beverage guilds, state liquor control, the bar associations, restaurateurs, and spirit marketing groups with its target of developing a Maine spirit event. For legislation, the MeDG will be looking to other states for guidance and perspective with new legislation and lobbying efforts looking

to ease the burden on distilleries. The guild will work to draft legislation following the examples of other states that enjoy a more favorable business climate for distilleries. Keith and Constance Bodine Sweetgrass Farm Winery and Distillery