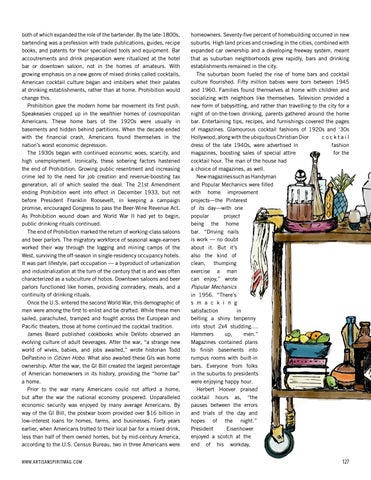 both of which expanded the role of the bartender. By the late-1800s, bartending was a profession with trade publications, guides, recipe books, and patents for their specialized tools and equipment. Bar accoutrements and drink preparation were ritualized at the hotel bar or downtown saloon, not in the homes of amateurs. With growing emphasis on a new genre of mixed drinks called cocktails, American cocktail culture began and imbibers whet their palates at drinking establishments, rather than at home. Prohibition would change this. Prohibition gave the modern home bar movement its first push. Speakeasies cropped up in the wealthier homes of cosmopolitan Americans. These home bars of the 1920s were usually in basements and hidden behind partitions. When the decade ended with the financial crash, Americans found themselves in the nation’s worst economic depression. The 1930s began with continued economic woes, scarcity, and high unemployment. Ironically, these sobering factors hastened the end of Prohibition. Growing public resentment and increasing crime led to the need for job creation and revenue-boosting tax generation, all of which sealed the deal. The 21st Amendment ending Prohibition went into effect in December 1933, but not before President Franklin Roosevelt, in keeping a campaign promise, encouraged Congress to pass the Beer-Wine Revenue Act. As Prohibition wound down and World War II had yet to begin, public drinking rituals continued. The end of Prohibition marked the return of working-class saloons and beer parlors. The migratory workforce of seasonal wage-earners worked their way through the logging and mining camps of the West, surviving the off-season in single-residency occupancy hotels. It was part lifestyle, part occupation — a byproduct of urbanization and industrialization at the turn of the century that is and was often characterized as a subculture of hobos. Downtown saloons and beer parlors functioned like homes, providing comradery, meals, and a continuity of drinking rituals. Once the U.S. entered the second World War, this demographic of men were among the first to enlist and be drafted. While these men sailed, parachuted, tramped and fought across the European and Pacific theaters, those at home continued the cocktail tradition. James Beard published cookbooks while DeVoto observed an evolving culture of adult beverages. After the war, “a strange new world of wives, babies, and jobs awaited,” wrote historian Todd DePastino in Citizen Hobo. What also awaited these GIs was home ownership. After the war, the GI Bill created the largest percentage of American homeowners in its history, providing the “home bar” a home. Prior to the war many Americans could not afford a home, but after the war the national economy prospered. Unparalleled economic security was enjoyed by many average Americans. By way of the GI Bill, the postwar boom provided over $16 billion in low-interest loans for homes, farms, and businesses. Forty years earlier, when Americans trotted to their local bar for a mixed drink, less than half of them owned homes, but by mid-century America, according to the U.S. Census Bureau, two in three Americans were WWW.ARTISANSPIRITMAG.COM

homeowners. Seventy-five percent of homebuilding occurred in new suburbs. High land prices and crowding in the cities, combined with expanded car ownership and a developing freeway system, meant that as suburban neighborhoods grew rapidly, bars and drinking establishments remained in the city. The suburban boom fueled the rise of home bars and cocktail culture flourished. Fifty million babies were born between 1945 and 1960. Families found themselves at home with children and socializing with neighbors like themselves. Television provided a new form of babysitting, and rather than travelling to the city for a night of on-the-town drinking, parents gathered around the home bar. Entertaining tips, recipes, and furnishings covered the pages of magazines. Glamourous cocktail fashions of 1920s and ‘30s Hollywood, along with the ubiquitous Christian Dior cocktail dress of the late 1940s, were advertised in fashion magazines, boosting sales of special attire for the cocktail hour. The man of the house had a choice of magazines, as well. New magazines such as Handyman and Popular Mechanics were filled with home improvement projects—the Pinterest of its day—with one popular project being the home bar. “Driving nails is work — no doubt about it. But it’s also the kind of clean, thumping exercise a man can enjoy,” wrote Popular Mechanics in 1956. “There’s s m a c k i n g satisfaction in belting a shiny tenpenny into stout 2x4 studding…. Hammers up, men.” Magazines contained plans to finish basements into rumpus rooms with built-in bars. Everyone from folks in the suburbs to presidents were enjoying happy hour. Herbert Hoover praised cocktail hours as, “the pauses between the errors and trials of the day and hopes of the night.” President Eisenhower enjoyed a scotch at the end of his workday,