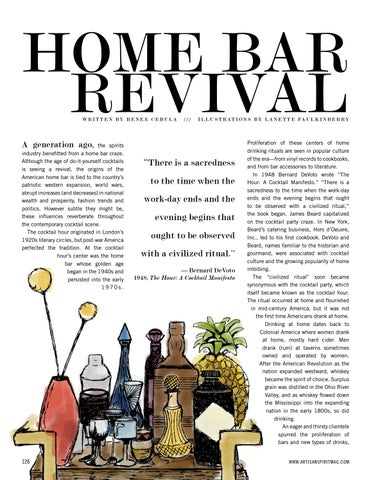 the spirits industry benefitted from a home bar craze. Although the age of do-it-yourself cocktails is seeing a revival, the origins of the American home bar is tied to the country’s patriotic western expansion, world wars, abrupt increases (and decreases) in national wealth and prosperity, fashion trends and politics. However subtle they might be, these influences reverberate throughout the contemporary cocktail scene. The cocktail hour originated in London’s 1920s literary circles, but post-war America perfected the tradition. At the cocktail hour’s center was the home bar whose golden age began in the 1940s and persisted into the early 1970s.

“There is a sacredness to the time when the work-day ends and the evening begins that ought to be observed with a civilized ritual.” — Bernard DeVoto 1948, The Hour: A Cocktail Manifesto

Proliferation of these centers of home drinking rituals are seen in popular culture of the era—from vinyl records to cookbooks, and from bar accessories to literature. In 1948 Bernard DeVoto wrote “The Hour: A Cocktail Manifesto.” “There is a sacredness to the time when the work-day ends and the evening begins that ought to be observed with a civilized ritual,” the book began. James Beard capitalized on the cocktail party craze. In New York, Beard’s catering business, Hors d’Oeuvre, Inc., led to his first cookbook. DeVoto and Beard, names familiar to the historian and gourmand, were associated with cocktail culture and the growing popularity of home imbibing. The “civilized ritual” soon became synonymous with the cocktail party, which itself became known as the cocktail hour. The ritual occurred at home and flourished in mid-century America, but it was not the first time Americans drank at home. Drinking at home dates back to Colonial America where women drank at home, mostly hard cider. Men drank (rum) at taverns sometimes owned and operated by women. After the American Revolution as the nation expanded westward, whiskey became the spirit of choice. Surplus grain was distilled in the Ohio River Valley, and as whiskey flowed down the Mississippi into the expanding nation in the early 1800s, so did drinking. An eager and thirsty clientele spurred the proliferation of bars and new types of drinks,