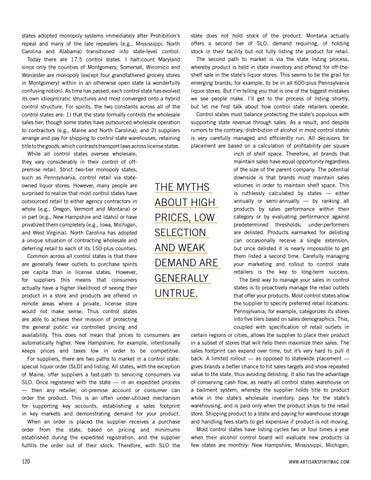 states adopted monopoly systems immediately after Prohibition’s repeal and many of the late repealers (e.g., Mississippi, North Carolina and Alabama) transitioned into state-level control. Today there are 17.5 control states. I half-count Maryland since only the counties of Montgomery, Somerset, Wicomico and Worcester are monopoly (except four grandfathered grocery stores in Montgomery) within in an otherwise open state (a wonderfully confusing notion). As time has passed, each control state has evolved its own idiosyncratic structures and most converged onto a hybrid control structure. For spirits, the two constants across all of the control states are: 1) that the state formally controls the wholesale sales tier, though some states have outsourced wholesale operation to contractors (e.g., Maine and North Carolina); and 2) suppliers arrange and pay for shipping to control state warehouses, retaining title to the goods, which contrasts transport laws across license states. While all control states oversee wholesale, they vary considerably in their control of offpremise retail. Strict two-tier monopoly states, such as Pennsylvania, control retail via stateowned liquor stores. However, many people are surprised to realize that most control states have outsourced retail to either agency contractors in whole (e.g., Oregon, Vermont and Montana) or in part (e.g., New Hampshire and Idaho) or have privatized them completely (e.g., Iowa, Michigan, and West Virginia). North Carolina has adopted a unique situation of contracting wholesale and deferring retail to each of its 150-plus counties. Common across all control states is that there are generally fewer outlets to purchase spirits per capita than in license states. However, for suppliers this means that consumers actually have a higher likelihood of seeing their product in a store and products are offered in remote areas where a private, license store would not make sense. Thus control states are able to achieve their mission of protecting the general public via controlled pricing and availability. This does not mean that prices to consumers are automatically higher. New Hampshire, for example, intentionally keeps prices and taxes low in order to be competitive. For suppliers, there are two paths to market in a control state: special liquor order (SLO) and listing. All states, with the exception of Maine, offer suppliers a fast-path to servicing consumers via SLO. Once registered with the state — in an expedited process — then any retailer, on-premise account or consumer can order the product. This is an often under-utilized mechanism for supporting key accounts, establishing a sales footprint in key markets and demonstrating demand for your product. When an order is placed the supplier receives a purchase order from the state, based on pricing and minimums established during the expedited registration, and the supplier fulfills the order out of their stock. Therefore, with SLO the

state does not hold stock of the product. Montana actually offers a second tier of SLO, demand requiring, of holding stock in their facility but not fully listing the product for retail. The second path to market is via the state listing process, whereby product is held in state inventory and offered for off-theshelf sale in the state’s liquor stores. This seems to be the grail for emerging brands; for example, to be in all 600-plus Pennsylvania liquor stores. But I’m telling you that is one of the biggest mistakes we see people make. I’ll get to the process of listing shortly, but let me first talk about how control state retailers operate. Control states must balance protecting the state’s populous with supporting state revenue through sales. As a result, and despite rumors to the contrary, distribution of alcohol in most control states is very carefully managed and efficiently run. All decisions for placement are based on a calculation of profitability per square inch of shelf space. Therefore, all brands that maintain sales have equal opportunity regardless of the size of the parent company. The potential downside is that brands must maintain sales volumes in order to maintain shelf space. This is ruthlessly calculated by states — either annually or semi-annually — by ranking all products by sales performance within their category or by evaluating performance against predetermined thresholds; under-performers are delisted. Products earmarked for delisting can occasionally receive a single extension, but once delisted it is nearly impossible to get them listed a second time. Carefully managing your marketing and rollout to control state retailers is the key to long-term success. The best way to manage your sales in control states is to proactively manage the retail outlets that offer your products. Most control states allow the supplier to specify preferred retail locations. Pennsylvania, for example, categorizes its stores into five tiers based on sales demographics. This, coupled with specification of retail outlets in certain regions or cities, allows the supplier to place their product in a subset of stores that will help them maximize their sales. The sales footprint can expand over time, but it’s very hard to pull it back. A limited rollout — as opposed to statewide placement — gives brands a better chance to hit sales targets and show repeated value to the state, thus avoiding delisting. It also has the advantage of conserving cash flow, as nearly all control states warehouse on a bailment system, whereby the supplier holds title to product while in the state’s wholesale inventory, pays for the state’s warehousing, and is paid only when the product ships to the retail store. Shipping product to a state and paying for warehouse storage and handling fees starts to get expensive if product is not moving. Most control states have listing cycles two or four times a year when their alcohol control board will evaluate new products (a few states are monthly: New Hampshire, Mississippi, Michigan,

THE MYTHS ABOUT HIGH PRICES, LOW SELECTION AND WEAK DEMAND ARE GENERALLY UNTRUE.