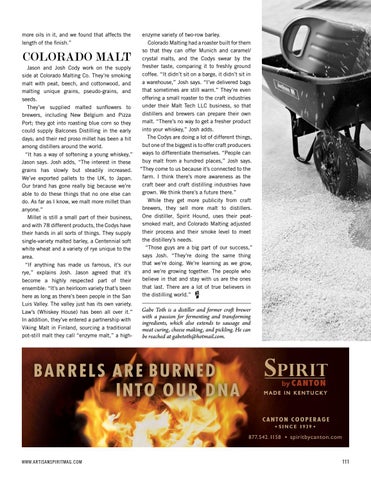 more oils in it, and we found that affects the length of the finish.”

COLORADO MALT Jason and Josh Cody work on the supply side at Colorado Malting Co. They’re smoking malt with peat, beech, and cottonwood, and malting unique grains, pseudo-grains, and seeds. They’ve supplied malted sunflowers to brewers, including New Belgium and Pizza Port; they got into roasting blue corn so they could supply Balcones Distilling in the early days; and their red proso millet has been a hit among distillers around the world. “It has a way of softening a young whiskey,” Jason says. Josh adds, “The interest in these grains has slowly but steadily increased. We’ve exported pallets to the UK, to Japan. Our brand has gone really big because we’re able to do these things that no one else can do. As far as I know, we malt more millet than anyone.” Millet is still a small part of their business, and with 78 different products, the Codys have their hands in all sorts of things. They supply single-variety malted barley, a Centennial soft white wheat and a variety of rye unique to the area. “If anything has made us famous, it’s our rye,” explains Josh. Jason agreed that it’s become a highly respected part of their ensemble: “It’s an heirloom variety that’s been here as long as there’s been people in the San Luis Valley. The valley just has its own variety. Law’s (Whiskey House) has been all over it.” In addition, they’ve entered a partnership with Viking Malt in Finland, sourcing a traditional pot-still malt they call “enzyme malt,” a high-

enzyme variety of two-row barley. Colorado Malting had a roaster built for them so that they can offer Munich and caramel/ crystal malts, and the Codys swear by the fresher taste, comparing it to freshly ground coffee. “It didn’t sit on a barge, it didn’t sit in a warehouse,” Josh says. “I’ve delivered bags that sometimes are still warm.” They’re even offering a small roaster to the craft industries under their Malt Tech LLC business, so that distillers and brewers can prepare their own malt. “There’s no way to get a fresher product into your whiskey,” Josh adds. The Codys are doing a lot of different things, but one of the biggest is to offer craft producers ways to differentiate themselves. “People can buy malt from a hundred places,” Josh says. “They come to us because it’s connected to the farm. I think there’s more awareness as the craft beer and craft distilling industries have grown. We think there’s a future there.” While they get more publicity from craft brewers, they sell more malt to distillers. One distiller, Spirit Hound, uses their peatsmoked malt, and Colorado Malting adjusted their process and their smoke level to meet the distillery’s needs. “Those guys are a big part of our success,” says Josh. “They’re doing the same thing that we’re doing. We’re learning as we grow, and we’re growing together. The people who believe in that and stay with us are the ones that last. There are a lot of true believers in the distilling world.”

Gabe Toth is a distiller and former craft brewer with a passion for fermenting and transforming ingredients, which also extends to sausage and meat curing, cheese making, and pickling. He can be reached at gabetoth@hotmail.com.