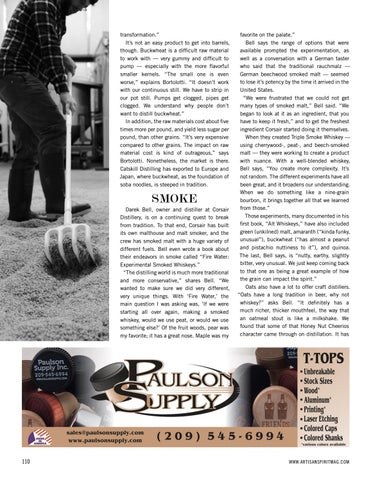 transformation.” It’s not an easy product to get into barrels, though. Buckwheat is a difficult raw material to work with — very gummy and difficult to pump — especially with the more flavorful smaller kernels. “The small one is even worse,” explains Bortolotti. “It doesn’t work with our continuous still. We have to strip in our pot still. Pumps get clogged, pipes get clogged. We understand why people don’t want to distill buckwheat.” In addition, the raw materials cost about five times more per pound, and yield less sugar per pound, than other grains. “It’s very expensive compared to other grains. The impact on raw material cost is kind of outrageous,” says Bortolotti. Nonetheless, the market is there. Catskill Distilling has exported to Europe and Japan, where buckwheat, as the foundation of soba noodles, is steeped in tradition.

SMOKE Darek Bell, owner and distiller at Corsair Distillery, is on a continuing quest to break from tradition. To that end, Corsair has built its own malthouse and malt smoker, and the crew has smoked malt with a huge variety of different fuels. Bell even wrote a book about their endeavors in smoke called “Fire Water: Experimental Smoked Whiskeys.” “The distilling world is much more traditional and more conservative,” shares Bell. “We wanted to make sure we did very different, very unique things. With ‘Fire Water,’ the main question I was asking was, ‘If we were starting all over again, making a smoked whiskey, would we use peat, or would we use something else?’ Of the fruit woods, pear was my favorite; it has a great nose. Maple was my

favorite on the palate.” Bell says the range of options that were available prompted the experimentation, as well as a conversation with a German taster who said that the traditional rauchmalz — German beechwood smoked malt — seemed to lose it’s potency by the time it arrived in the United States. “We were frustrated that we could not get many types of smoked malt,” Bell said. “We began to look at it as an ingredient, that you have to keep it fresh,” and to get the freshest ingredient Corsair started doing it themselves. When they created Triple Smoke Whiskey — using cherrywood-, peat-, and beech-smoked malt — they were working to create a product with nuance. With a well-blended whiskey, Bell says, “You create more complexity. It’s not random. The different experiments have all been great, and it broadens our understanding. When we do something like a nine-grain bourbon, it brings together all that we learned from those.” Those experiments, many documented in his first book, “Alt Whiskeys,” have also included green (unkilned) malt, amaranth (“kinda funky, unusual”), buckwheat (“has almost a peanut and pistachio nuttiness to it”), and quinoa. The last, Bell says, is “nutty, earthy, slightly bitter, very unusual. We just keep coming back to that one as being a great example of how the grain can impact the spirit.” Oats also have a lot to offer craft distillers. “Oats have a long tradition in beer, why not whiskey?” asks Bell. “It definitely has a much richer, thicker mouthfeel, the way that an oatmeal stout is like a milkshake. We found that some of that Honey Nut Cheerios character came through on distillation. It has