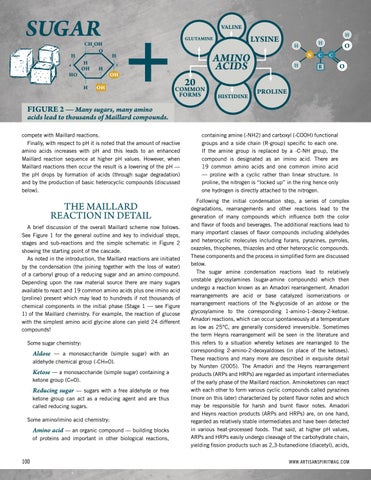 FIGURE 2 — Many sugars, many amino acids lead to thousands of Maillard compounds. compete with Maillard reactions. Finally, with respect to pH it is noted that the amount of reactive amino acids increases with pH and this leads to an enhanced Maillard reaction sequence at higher pH values. However, when Maillard reactions then occur the result is a lowering of the pH — the pH drops by formation of acids (through sugar degradation) and by the production of basic heterocyclic compounds (discussed below).

THE MAILLARD REACTION IN DETAIL A brief discussion of the overall Maillard scheme now follows. See Figure 1 for the general outline and key to individual steps, stages and sub-reactions and the simple schematic in Figure 2 showing the starting point of the cascade. As noted in the introduction, the Maillard reactions are initiated by the condensation (the joining together with the loss of water) of a carbonyl group of a reducing sugar and an amino compound. Depending upon the raw material source there are many sugars available to react and 19 common amino acids plus one imino acid (proline) present which may lead to hundreds if not thousands of chemical components in the initial phase (Stage 1 — see Figure 1) of the Maillard chemistry. For example, the reaction of glucose with the simplest amino acid glycine alone can yield 24 different compounds! Some sugar chemistry:

Amino acid — an organic compound — building blocks of proteins and important in other biological reactions, 100

containing amine (-NH2) and carboxyl (-COOH) functional groups and a side chain (R-group) specific to each one. If the amine group is replaced by a -C-NH group, the compound is designated as an imino acid. There are 19 common amino acids and one common imino acid — proline with a cyclic rather than linear structure. In proline, the nitrogen is “locked up” in the ring hence only one hydrogen is directly attached to the nitrogen. Following the initial condensation step, a series of complex degradations, rearrangements and other reactions lead to the generation of many compounds which influence both the color and flavor of foods and beverages. The additional reactions lead to many important classes of flavor compounds including aldehydes and heterocyclic molecules including furans, pyrazines, pyrroles, oxazoles, thiophenes, thiazoles and other heterocyclic compounds. These components and the process in simplified form are discussed below. The sugar amine condensation reactions lead to relatively unstable glycosylamines (sugar-amine compounds) which then undergo a reaction known as an Amadori rearrangement. Amadori rearrangements are acid or base catalyzed isomerizations or rearrangement reactions of the N-glycoside of an aldose or the glycosylamine to the corresponding 1-amino-1-deoxy-2-ketose. Amadori reactions, which can occur spontaneously at a temperature as low as 25°C, are generally considered irreversible. Sometimes the term Heyns rearrangement will be seen in the literature and this refers to a situation whereby ketoses are rearranged to the corresponding 2-amino-2-deoxyaldoses (in place of the ketoses). These reactions and many more are described in exquisite detail by Nursten (2005). The Amadori and the Heyns rearrangement products (ARPs and HRPs) are regarded as important intermediates of the early phase of the Maillard reaction. Aminoketones can react with each other to form various cyclic compounds called pyrazines (more on this later) characterized by potent flavor notes and which may be responsible for harsh and burnt flavor notes. Amadori and Heyns reaction products (ARPs and HRPs) are, on one hand, regarded as relatively stable intermediates and have been detected in various heat-processed foods. That said, at higher pH values, ARPs and HRPs easily undergo cleavage of the carbohydrate chain, yielding fission products such as 2,3-butanedione (diacetyl), acids, WWW.ARTISANSPIRITMAG.COM