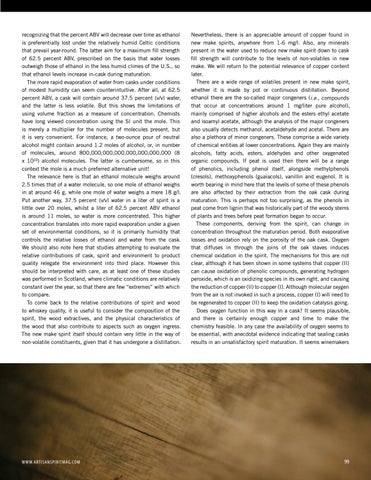 recognizing that the percent ABV will decrease over time as ethanol is preferentially lost under the relatively humid Celtic conditions that prevail year-round. The latter aim for a maximum fill strength of 62.5 percent ABV, prescribed on the basis that water losses outweigh those of ethanol in the less humid climes of the U.S., so that ethanol levels increase in-cask during maturation. The more rapid evaporation of water from casks under conditions of modest humidity can seem counterintuitive. After all, at 62.5 percent ABV, a cask will contain around 37.5 percent (v/v) water, and the latter is less volatile. But this shows the limitations of using volume fraction as a measure of concentration. Chemists have long viewed concentration using the SI unit the mole. This is merely a multiplier for the number of molecules present, but it is very convenient. For instance, a two-ounce pour of neutral alcohol might contain around 1.2 moles of alcohol, or, in number of molecules, around 800,000,000,000,000,000,000,000 (8 x 1023) alcohol molecules. The latter is cumbersome, so in this context the mole is a much preferred alternative unit! The relevance here is that an ethanol molecule weighs around 2.5 times that of a water molecule, so one mole of ethanol weighs in at around 46 g, while one mole of water weighs a mere 18 g/l. Put another way, 37.5 percent (v/v) water in a liter of spirit is a little over 20 moles, whilst a liter of 62.5 percent ABV ethanol is around 11 moles, so water is more concentrated. This higher concentration translates into more rapid evaporation under a given set of environmental conditions, so it is primarily humidity that controls the relative losses of ethanol and water from the cask. We should also note here that studies attempting to evaluate the relative contributions of cask, spirit and environment to product quality relegate the environment into third place. However this should be interpreted with care, as at least one of these studies was performed in Scotland, where climatic conditions are relatively constant over the year, so that there are few â&#x20AC;&#x153;extremesâ&#x20AC;? with which to compare. To come back to the relative contributions of spirit and wood to whiskey quality, it is useful to consider the composition of the spirit, the wood extractives, and the physical characteristics of the wood that also contribute to aspects such as oxygen ingress. The new make spirit itself should contain very little in the way of non-volatile constituents, given that it has undergone a distillation.

Nevertheless, there is an appreciable amount of copper found in new make spirits, anywhere from 1-6 mg/l. Also, any minerals present in the water used to reduce new make spirit down to cask fill strength will contribute to the levels of non-volatiles in new make. We will return to the potential relevance of copper content later. There are a wide range of volatiles present in new make spirit, whether it is made by pot or continuous distillation. Beyond ethanol there are the so-called major congeners (i.e., compounds that occur at concentrations around 1 mg/liter pure alcohol), mainly comprised of higher alcohols and the esters ethyl acetate and isoamyl acetate, although the analysis of the major congeners also usually detects methanol, acetaldehyde and acetal. There are also a plethora of minor congeners. These comprise a wide variety of chemical entities at lower concentrations. Again they are mainly alcohols, fatty acids, esters, aldehydes and other oxygenated organic compounds. If peat is used then there will be a range of phenolics, including phenol itself, alongside methylphenols (cresols), methoxyphenols (guaiacols), vanillin and eugenol. It is worth bearing in mind here that the levels of some of these phenols are also affected by their extraction from the oak cask during maturation. This is perhaps not too surprising, as the phenols in peat come from lignin that was historically part of the woody stems of plants and trees before peat formation began to occur. These components, deriving from the spirit, can change in concentration throughout the maturation period. Both evaporative losses and oxidation rely on the porosity of the oak cask. Oxygen that diffuses in through the joins of the oak staves induces chemical oxidation in the spirit. The mechanisms for this are not clear, although it has been shown in some systems that copper (II) can cause oxidation of phenolic compounds, generating hydrogen peroxide, which is an oxidizing species in its own right, and causing the reduction of copper (II) to copper (I). Although molecular oxygen from the air is not invoked in such a process, copper (I) will need to be regenerated to copper (II) to keep the oxidation catalysis going. Does oxygen function in this way in a cask? It seems plausible, and there is certainly enough copper and time to make the chemistry feasible. In any case the availability of oxygen seems to be essential, with anecdotal evidence indicating that sealing casks results in an unsatisfactory spirit maturation. It seems winemakers