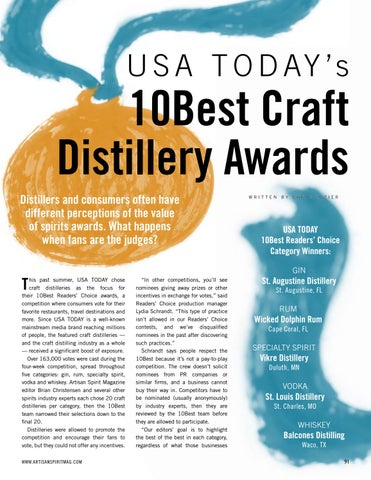 10Best Craft Distillery Awards Distillers and consumers often have different perceptions of the value of spirits awards. What happens when fans are the judges?

his past summer, USA TODAY chose craft distilleries as the focus for their 10Best Readers’ Choice awards, a competition where consumers vote for their favorite restaurants, travel destinations and more. Since USA TODAY is a well-known mainstream media brand reaching millions of people, the featured craft distilleries — and the craft distilling industry as a whole — received a significant boost of exposure. Over 163,000 votes were cast during the four-week competition, spread throughout five categories: gin, rum, specialty spirit, vodka and whiskey. Artisan Spirit Magazine editor Brian Christensen and several other spirits industry experts each chose 20 craft distilleries per category, then the 10Best team narrowed their selections down to the final 20. Distilleries were allowed to promote the competition and encourage their fans to vote, but they could not offer any incentives.

“In other competitions, you’ll see nominees giving away prizes or other incentives in exchange for votes,” said Readers’ Choice production manager Lydia Schrandt. “This type of practice isn’t allowed in our Readers’ Choice contests, and we’ve disqualified nominees in the past after discovering such practices.” Schrandt says people respect the 10Best because it’s not a pay-to-play competition. The crew doesn’t solicit nominees from PR companies or similar firms, and a business cannot buy their way in. Competitors have to be nominated (usually anonymously) by industry experts, then they are reviewed by the 10Best team before they are allowed to participate. “Our editors’ goal is to highlight the best of the best in each category, regardless of what those businesses