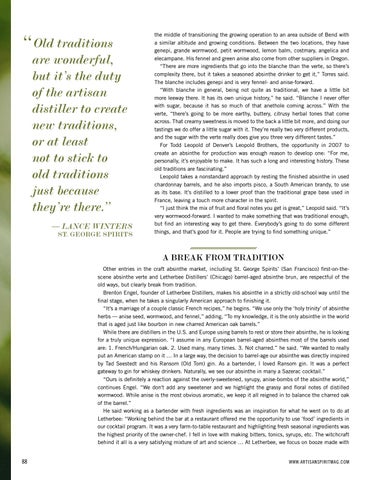 are wonderful, but it’s the duty of the artisan distiller to create new traditions, or at least not to stick to old traditions just because they’re there.” — LANCE WINTERS ST. GEORGE SPIRITS

the middle of transitioning the growing operation to an area outside of Bend with a similar altitude and growing conditions. Between the two locations, they have genepi, grande wormwood, petit wormwood, lemon balm, costmary, angelica and elecampane. His fennel and green anise also come from other suppliers in Oregon. “There are more ingredients that go into the blanche than the verte, so there’s complexity there, but it takes a seasoned absinthe drinker to get it,” Torres said. The blanche includes genepi and is very fennel- and anise-forward. “With blanche in general, being not quite as traditional, we have a little bit more leeway there. It has its own unique history,” he said. “Blanche I never offer with sugar, because it has so much of that anethole coming across.” With the verte, “there’s going to be more earthy, buttery, citrusy herbal tones that come across. That creamy sweetness is moved to the back a little bit more, and doing our tastings we do offer a little sugar with it. They’re really two very different products, and the sugar with the verte really does give you three very different tastes.” For Todd Leopold of Denver’s Leopold Brothers, the opportunity in 2007 to create an absinthe for production was enough reason to develop one: “For me, personally, it’s enjoyable to make. It has such a long and interesting history. These old traditions are fascinating.” Leopold takes a nonstandard approach by resting the finished absinthe in used chardonnay barrels, and he also imports pisco, a South American brandy, to use as its base. It’s distilled to a lower proof than the traditional grape base used in France, leaving a touch more character in the spirit. “I just think the mix of fruit and floral notes you get is great,” Leopold said. “It’s very wormwood-forward. I wanted to make something that was traditional enough, but find an interesting way to get there. Everybody’s going to do some different things, and that’s good for it. People are trying to find something unique.”

A BREAK FROM TRADITION Other entries in the craft absinthe market, including St. George Spirits’ (San Francisco) first-on-thescene absinthe verte and Letherbee Distillers’ (Chicago) barrel-aged absinthe brun, are respectful of the old ways, but clearly break from tradition. Brenton Engel, founder of Letherbee Distillers, makes his absinthe in a strictly old-school way until the final stage, when he takes a singularly American approach to finishing it. “It's a marriage of a couple classic French recipes,” he begins. “We use only the ‘holy trinity’ of absinthe herbs — anise seed, wormwood, and fennel,” adding, “To my knowledge, it is the only absinthe in the world that is aged just like bourbon in new charred American oak barrels.” While there are distillers in the U.S. and Europe using barrels to rest or store their absinthe, he is looking for a truly unique expression. “I assume in any European barrel-aged absinthes most of the barrels used are: 1. French/Hungarian oak. 2. Used many, many times. 3. Not charred.” he said. “We wanted to really put an American stamp on it … In a large way, the decision to barrel-age our absinthe was directly inspired by Tad Seestedt and his Ransom (Old Tom) gin. As a bartender, I loved Ransom gin. It was a perfect gateway to gin for whiskey drinkers. Naturally, we see our absinthe in many a Sazerac cocktail.” “Ours is definitely a reaction against the overly-sweetened, syrupy, anise-bombs of the absinthe world,” continues Engel. “We don't add any sweetener and we highlight the grassy and floral notes of distilled wormwood. While anise is the most obvious aromatic, we keep it all reigned in to balance the charred oak of the barrel.” He said working as a bartender with fresh ingredients was an inspiration for what he went on to do at Letherbee: “Working behind the bar at a restaurant offered me the opportunity to use ‘food’ ingredients in our cocktail program. It was a very farm-to-table restaurant and highlighting fresh seasonal ingredients was the highest priority of the owner-chef. I fell in love with making bitters, tonics, syrups, etc. The witchcraft behind it all is a very satisfying mixture of art and science … At Letherbee, we focus on booze made with