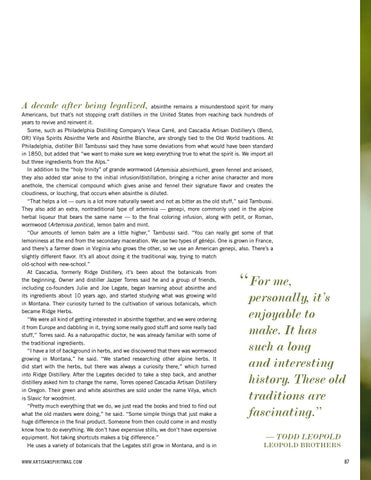 A decade after being legalized,

absinthe remains a misunderstood spirit for many Americans, but that’s not stopping craft distillers in the United States from reaching back hundreds of years to revive and reinvent it. Some, such as Philadelphia Distilling Company’s Vieux Carré, and Cascadia Artisan Distillery’s (Bend, OR) Vilya Spirits Absinthe Verte and Absinthe Blanche, are strongly tied to the Old World traditions. At Philadelphia, distiller Bill Tambussi said they have some deviations from what would have been standard in 1850, but added that “we want to make sure we keep everything true to what the spirit is. We import all but three ingredients from the Alps.” In addition to the “holy trinity” of grande wormwood (Artemisia absinthium), green fennel and aniseed, they also added star anise to the initial infusion/distillation, bringing a richer anise character and more anethole, the chemical compound which gives anise and fennel their signature flavor and creates the cloudiness, or louching, that occurs when absinthe is diluted. “That helps a lot — ours is a lot more naturally sweet and not as bitter as the old stuff,” said Tambussi. They also add an extra, nontraditional type of artemisia — genepi, more commonly used in the alpine herbal liqueur that bears the same name — to the final coloring infusion, along with petit, or Roman, wormwood (Artemisia pontica), lemon balm and mint. “Our amounts of lemon balm are a little higher,” Tambussi said. “You can really get some of that lemoniness at the end from the secondary maceration. We use two types of génépi. One is grown in France, and there’s a farmer down in Virginia who grows the other, so we use an American genepi, also. There’s a slightly different flavor. It’s all about doing it the traditional way, trying to match old-school with new-school.” At Cascadia, formerly Ridge Distillery, it’s been about the botanicals from the beginning. Owner and distiller Jazper Torres said he and a group of friends, including co-founders Julie and Joe Legate, began learning about absinthe and its ingredients about 10 years ago, and started studying what was growing wild in Montana. Their curiosity turned to the cultivation of various botanicals, which became Ridge Herbs. “We were all kind of getting interested in absinthe together, and we were ordering it from Europe and dabbling in it, trying some really good stuff and some really bad stuff,” Torres said. As a naturopathic doctor, he was already familiar with some of the traditional ingredients. “I have a lot of background in herbs, and we discovered that there was wormwood growing in Montana,” he said. “We started researching other alpine herbs. It did start with the herbs, but there was always a curiosity there,” which turned into Ridge Distillery. After the Legates decided to take a step back, and another distillery asked him to change the name, Torres opened Cascadia Artisan Distillery in Oregon. Their green and white absinthes are sold under the name Vilya, which is Slavic for woodmint. “Pretty much everything that we do, we just read the books and tried to find out what the old masters were doing,” he said. “Some simple things that just make a huge difference in the final product. Someone from then could come in and mostly know how to do everything. We don’t have expensive stills, we don’t have expensive equipment. Not taking shortcuts makes a big difference.” — TODD LEOPOLD He uses a variety of botanicals that the Legates still grow in Montana, and is in LEOPOLD BROTHERS

personally, it’s enjoyable to make. It has such a long and interesting history. These old traditions are fascinating.”