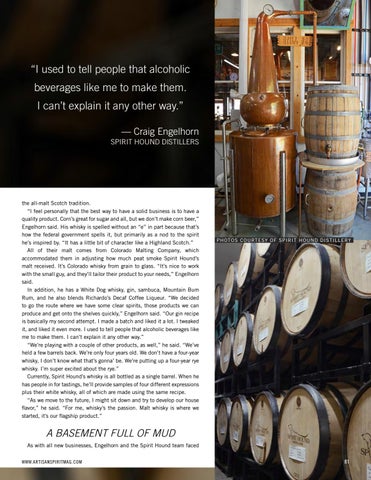 “I used to tell people that alcoholic beverages like me to make them. I can’t explain it any other way.” — Craig Engelhorn SPIRIT HOUND DISTILLERS

the all-malt Scotch tradition. “I feel personally that the best way to have a solid business is to have a quality product. Corn’s great for sugar and all, but we don’t make corn beer,” Engelhorn said. His whisky is spelled without an “e” in part because that’s how the federal government spells it, but primarily as a nod to the spirit he’s inspired by. “It has a little bit of character like a Highland Scotch.” All of their malt comes from Colorado Malting Company, which accommodated them in adjusting how much peat smoke Spirit Hound’s malt received. It’s Colorado whisky from grain to glass. “It’s nice to work with the small guy, and they’ll tailor their product to your needs,” Engelhorn said. In addition, he has a White Dog whisky, gin, sambuca, Mountain Bum Rum, and he also blends Richardo’s Decaf Coffee Liqueur. “We decided to go the route where we have some clear spirits, those products we can produce and get onto the shelves quickly,” Engelhorn said. “Our gin recipe is basically my second attempt. I made a batch and liked it a lot. I tweaked it, and liked it even more. I used to tell people that alcoholic beverages like me to make them. I can’t explain it any other way.” “We’re playing with a couple of other products, as well,” he said. “We’ve held a few barrels back. We’re only four years old. We don’t have a four-year whisky, I don’t know what that’s gonna’ be. We’re putting up a four-year rye whisky. I’m super excited about the rye.” Currently, Spirit Hound’s whisky is all bottled as a single barrel. When he has people in for tastings, he’ll provide samples of four different expressions plus their white whisky, all of which are made using the same recipe. “As we move to the future, I might sit down and try to develop our house flavor,” he said. “For me, whisky’s the passion. Malt whisky is where we started, it’s our flagship product.”

A BASEMENT FULL OF MUD As with all new businesses, Engelhorn and the Spirit Hound team faced WWW.ARTISANSPIRITMAG.COM