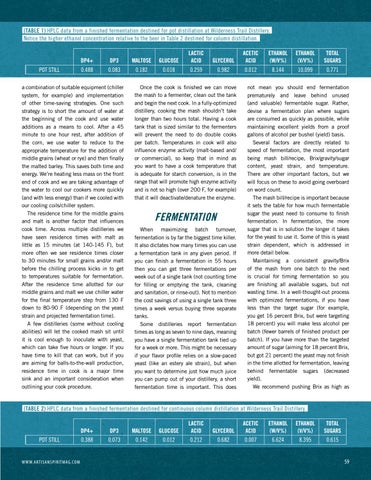 (TABLE 1) HPLC data from a finished fermentation destined for pot distillation at Wilderness Trail Distillery. Notice the higher ethanol concentration relative to the beer in Table 2 destined for column distillation.

a combination of suitable equipment (chiller system, for example) and implementation of other time-saving strategies. One such strategy is to short the amount of water at the beginning of the cook and use water additions as a means to cool. After a 45 minute to one hour rest, after addition of the corn, we use water to reduce to the appropriate temperature for the addition of middle grains (wheat or rye) and then finally the malted barley. This saves both time and energy. We’re heating less mass on the front end of cook and we are taking advantage of the water to cool our cookers more quickly (and with less energy) than if we cooled with our cooling coils/chiller system. The residence time for the middle grains and malt is another factor that influences cook time. Across multiple distilleries we have seen residence times with malt as little as 15 minutes (at 140-145 F), but more often we see residence times closer to 30 minutes for small grains and/or malt before the chilling process kicks in to get to temperatures suitable for fermentation. After the residence time allotted for our middle grains and malt we use chiller water for the final temperature step from 130 F down to 80-90 F (depending on the yeast strain and projected fermentation time). A few distilleries (some without cooling abilities) will let the cooked mash sit until it is cool enough to inoculate with yeast, which can take five hours or longer. If you have time to kill that can work, but if you are aiming for balls-to-the-wall production, residence time in cook is a major time sink and an important consideration when outlining your cook procedure.

Once the cook is finished we can move the mash to a fermenter, clean out the tank and begin the next cook. In a fully-optimized distillery, cooking the mash shouldn’t take longer than two hours total. Having a cook tank that is sized similar to the fermenters will prevent the need to do double cooks per batch. Temperatures in cook will also influence enzyme activity (malt-based and/ or commercial), so keep that in mind as you want to have a cook temperature that is adequate for starch conversion, is in the range that will promote high enzyme activity and is not so high (over 200 F, for example) that it will deactivate/denature the enzyme.

FERMENTATION When maximizing batch turnover, fermentation is by far the biggest time killer. It also dictates how many times you can use a fermentation tank in any given period. If you can finish a fermentation in 55 hours then you can get three fermentations per week out of a single tank (not counting time for filling or emptying the tank, cleaning and sanitation, or rinse-out). Not to mention the cost savings of using a single tank three times a week versus buying three separate tanks. Some distilleries report fermentation times as long as seven to nine days, meaning you have a single fermentation tank tied up for a week or more. This might be necessary if your flavor profile relies on a slow-paced yeast (like an estery ale strain), but when you want to determine just how much juice you can pump out of your distillery, a short fermentation time is important. This does

not mean you should end fermentation prematurely and leave behind unused (and valuable) fermentable sugar. Rather, devise a fermentation plan where sugars are consumed as quickly as possible, while maintaining excellent yields from a proof gallons of alcohol per bushel (yield) basis. Several factors are directly related to speed of fermentation, the most important being mash bill/recipe, Brix/gravity/sugar content, yeast strain, and temperature. There are other important factors, but we will focus on these to avoid going overboard on word count. The mash bill/recipe is important because it sets the table for how much fermentable sugar the yeast need to consume to finish fermentation. In fermentation, the more sugar that is in solution the longer it takes for the yeast to use it. Some of this is yeast strain dependent, which is addressed in more detail below. Maintaining a consistent gravity/Brix of the mash from one batch to the next is crucial for timing fermentation so you are finishing all available sugars, but not wasting time. In a well-thought-out process with optimized fermentations, if you have less than the target sugar (for example, you get 16 percent Brix, but were targeting 18 percent) you will make less alcohol per batch (fewer barrels of finished product per batch). If you have more than the targeted amount of sugar (aiming for 18 percent Brix, but got 21 percent) the yeast may not finish in the time allotted for fermentation, leaving behind fermentable sugars (decreased yield). We recommend pushing Brix as high as