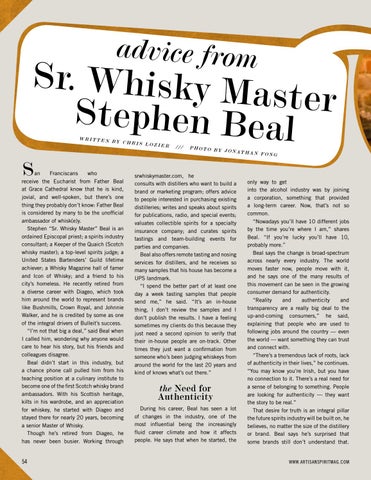 an Franciscans who receive the Eucharist from Father Beal at Grace Cathedral know that he is kind, jovial, and well-spoken, but there’s one thing they probably don’t know: Father Beal is considered by many to be the unofficial ambassador of whisk(e)y. Stephen “Sr. Whisky Master” Beal is an ordained Episcopal priest; a spirits industry consultant; a Keeper of the Quaich (Scotch whisky master); a top-level spirits judge; a United States Bartenders’ Guild lifetime achiever; a Whisky Magazine hall of famer and Icon of Whisky; and a friend to his city’s homeless. He recently retired from a diverse career with Diageo, which took him around the world to represent brands like Bushmills, Crown Royal, and Johnnie Walker, and he is credited by some as one of the integral drivers of Bulleit’s success. “I’m not that big a deal,” said Beal when I called him, wondering why anyone would care to hear his story, but his friends and colleagues disagree. Beal didn’t start in this industry, but a chance phone call pulled him from his teaching position at a culinary institute to become one of the first Scotch whisky brand ambassadors. With his Scottish heritage, kilts in his wardrobe, and an appreciation for whiskey, he started with Diageo and stayed there for nearly 20 years, becoming a senior Master of Whisky. Though he’s retired from Diageo, he has never been busier. Working through

srwhiskymaster.com, he consults with distillers who want to build a brand or marketing program; offers advice to people interested in purchasing existing distilleries; writes and speaks about spirits for publications, radio, and special events; valuates collectible spirits for a specialty insurance company; and curates spirits tastings and team-building events for parties and companies. Beal also offers remote tasting and nosing services for distillers, and he receives so many samples that his house has become a UPS landmark. “I spend the better part of at least one day a week tasting samples that people send me,” he said. “It’s an in-house thing, I don’t review the samples and I don’t publish the results. I have a feeling sometimes my clients do this because they just need a second opinion to verify that their in-house people are on-track. Other times they just want a confirmation from someone who’s been judging whiskeys from around the world for the last 20 years and kind of knows what’s out there.”

the Need for Authenticity During his career, Beal has seen a lot of changes in the industry, one of the most influential being the increasingly fluid career climate and how it affects people. He says that when he started, the

only way to get into the alcohol industry was by joining a corporation, something that provided a long-term career. Now, that’s not so common. “Nowadays you’ll have 10 different jobs by the time you’re where I am,” shares Beal. “If you’re lucky you’ll have 10, probably more.” Beal says the change is broad-spectrum across nearly every industry. The world moves faster now, people move with it, and he says one of the many results of this movement can be seen in the growing consumer demand for authenticity. “Reality and authenticity and transparency are a really big deal to the up-and-coming consumers,” he said, explaining that people who are used to following jobs around the country — even the world — want something they can trust and connect with. “There’s a tremendous lack of roots, lack of authenticity in their lives,” he continues. “You may know you’re Irish, but you have no connection to it. There’s a real need for a sense of belonging to something. People are looking for authenticity — they want the story to be real.” That desire for truth is an integral pillar the future spirits industry will be built on, he believes, no matter the size of the distillery or brand. Beal says he’s surprised that some brands still don’t understand that.