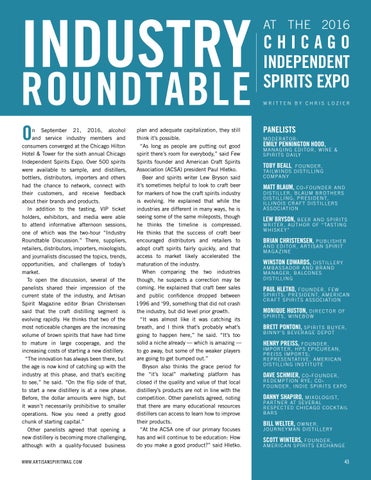 n September 21, 2016, alcohol and service industry members and consumers converged at the Chicago Hilton Hotel & Tower for the sixth annual Chicago Independent Spirits Expo. Over 500 spirits were available to sample, and distillers, bottlers, distributors, importers and others had the chance to network, connect with their customers, and receive feedback about their brands and products. In addition to the tasting, VIP ticket holders, exhibitors, and media were able to attend informative afternoon sessions, one of which was the two-hour “Industry Roundtable Discussion.” There, suppliers, retailers, distributors, importers, mixologists, and journalists discussed the topics, trends, opportunities, and challenges of today’s market. To open the discussion, several of the panelists shared their impression of the current state of the industry, and Artisan Spirit Magazine editor Brian Christensen said that the craft distilling segment is evolving rapidly. He thinks that two of the most noticeable changes are the increasing volume of brown spirits that have had time to mature in large cooperage, and the increasing costs of starting a new distillery. “The innovation has always been there, but the age is now kind of catching up with the industry at this phase, and that’s exciting to see,” he said. “On the flip side of that, to start a new distillery is at a new phase. Before, the dollar amounts were high, but it wasn’t necessarily prohibitive to smaller operations. Now you need a pretty good chunk of starting capital.” Other panelists agreed that opening a new distillery is becoming more challenging, although with a quality-focused business WWW.ARTISANSPIRITMAG.COM

plan and adequate capitalization, they still think it’s possible. “As long as people are putting out good spirit there’s room for everybody,” said Few Spirits founder and American Craft Spirits Association (ACSA) president Paul Hletko. Beer and spirits writer Lew Bryson said it’s sometimes helpful to look to craft beer for markers of how the craft spirits industry is evolving. He explained that while the industries are different in many ways, he is seeing some of the same mileposts, though he thinks the timeline is compressed. He thinks that the success of craft beer encouraged distributors and retailers to adopt craft spirits fairly quickly, and that access to market likely accelerated the maturation of the industry. When comparing the two industries though, he suspects a correction may be coming. He explained that craft beer sales and public confidence dropped between 1996 and ‘99, something that did not crash the industry, but did level prior growth. “It was almost like it was catching its breath, and I think that’s probably what’s going to happen here,” he said. “It’s too solid a niche already — which is amazing — to go away, but some of the weaker players are going to get bumped out.” Bryson also thinks the grace period for the “it’s local” marketing platform has closed if the quality and value of that local distillery’s products are not in line with the competition. Other panelists agreed, noting that there are many educational resources distillers can access to learn how to improve their products. “At the ACSA one of our primary focuses has and will continue to be education: How do you make a good product?” said Hletko.