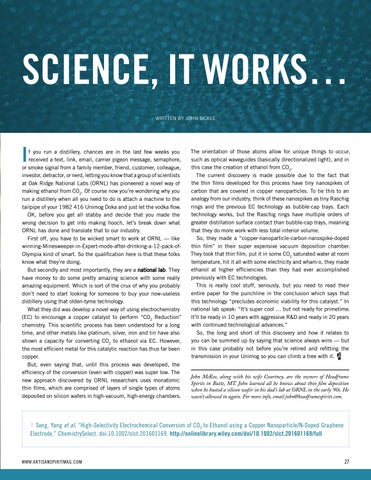 f you run a distillery, chances are in the last few weeks you received a text, link, email, carrier pigeon message, semaphore, or smoke signal from a family member, friend, customer, colleague, investor, detractor, or nerd, letting you know that a group of scientists at Oak Ridge National Labs (ORNL) has pioneered a novel way of making ethanol from CO2. Of course now you’re wondering why you run a distillery when all you need to do is attach a machine to the tailpipe of your 1982 416 Unimog Doka and just let the vodka flow. OK, before you get all stabby and decide that you made the wrong decision to get into making hooch, let’s break down what ORNL has done and translate that to our industry. First off, you have to be wicked smart to work at ORNL — like winning-Minesweeper-in-Expert-mode-after-drinking-a-12-pack-ofOlympia kind of smart. So the qualification here is that these folks know what they’re doing. But secondly and most importantly, they are a national lab. They have money to do some pretty amazing science with some really amazing equipment. Which is sort of the crux of why you probably don’t need to start looking for someone to buy your now-useless distillery using that olden-tyme technology. What they did was develop a novel way of using electrochemistry (EC) to encourage a copper catalyst to perform “CO2 Reduction” chemistry. This scientific process has been understood for a long time, and other metals like platinum, silver, iron and tin have also shown a capacity for converting CO2 to ethanol via EC. However, the most efficient metal for this catalytic reaction has thus far been copper. But, even saying that, until this process was developed, the efficiency of the conversion (even with copper) was super low. The new approach discovered by ORNL researchers uses monatomic thin films, which are comprised of layers of single types of atoms deposited on silicon wafers in high-vacuum, high-energy chambers.

The orientation of those atoms allow for unique things to occur, such as optical waveguides (basically directionalized light), and in this case the creation of ethanol from CO2. The current discovery is made possible due to the fact that the thin films developed for this process have tiny nanospikes of carbon that are covered in copper nanoparticles. To tie this to an analogy from our industry, think of these nanospikes as tiny Raschig rings and the previous EC technology as bubble-cap trays. Each technology works, but the Raschig rings have multiple orders of greater distillation surface contact than bubble-cap trays, meaning that they do more work with less total interior volume. So, they made a “copper-nanoparticle-carbon-nanospike-doped thin film” in their super expensive vacuum deposition chamber. They took that thin film, put it in some CO2 saturated water at room temperature, hit it all with some electricity and wham-o, they made ethanol at higher efficiencies than they had ever accomplished previously with EC technologies. This is really cool stuff, seriously, but you need to read their entire paper for the punchline in the conclusion which says that this technology “precludes economic viability for this catalyst.” In national lab speak: “It’s super cool … but not ready for primetime. It’ll be ready in 10 years with aggressive R&D and ready in 20 years with continued technological advances.” So, the long and short of this discovery and how it relates to you can be summed up by saying that science always wins — but in this case probably not before you’re retired and refitting the transmission in your Unimog so you can climb a tree with it. John McKee, along with his wife Courtney, are the owners of Headframe Spirits in Butte, MT. John learned all he knows about thin film deposition when he busted a silicon wafer in his dad’s lab at ORNL in the early ‘90s. He wasn’t allowed in again. For more info, email john@headframespirits.com.