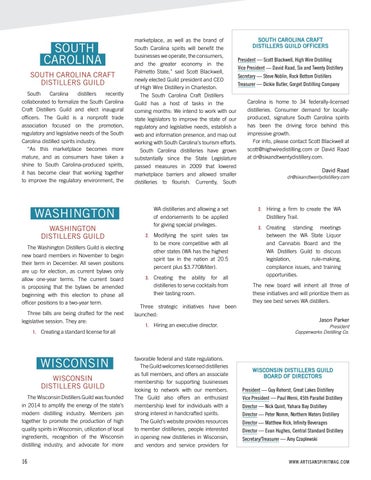 WASHINGTON WASHINGTON DISTILLERS GUILD The Washington Distillers Guild is electing new board members in November to begin their term in December. All seven positions are up for election, as current bylaws only allow one-year terms. The current board is proposing that the bylaws be amended beginning with this election to phase all officer positions to a two-year term. Three bills are being drafted for the next legislative session. They are:

SOUTH CAROLINA CRAFT marketplace, as well as the brand of DISTILLERS GUILD OFFICERS South Carolina spirits will benefit the businesses we operate, the consumers, President — Scott Blackwell, High Wire Distilling and the greater economy in the Vice President — David Raad, Six and Twenty Distillery Palmetto State,” said Scott Blackwell, Secretary — Steve Noblin, Rock Bottom Distillers newly elected Guild president and CEO Treasurer — Dickie Butler, Gorget Distilling Company of High Wire Distillery in Charleston. The South Carolina Craft Distillers Carolina is home to 34 federally-licensed Guild has a host of tasks in the distilleries. Consumer demand for locallycoming months: We intend to work with our produced, signature South Carolina spirits state legislators to improve the state of our has been the driving force behind this regulatory and legislative needs, establish a impressive growth. web and information presence, and map out For info, please contact Scott Blackwell at working with South Carolina’s tourism efforts. scott@highwiredistilling.com or David Raad South Carolina distilleries have grown at dr@sixandtwentydistillery.com. substantially since the State Legislature passed measures in 2009 that lowered marketplace barriers and allowed smaller distilleries to flourish. Currently, South

WA distilleries and allowing a set of endorsements to be applied for giving special privileges. 2. Modifying the spirit sales tax

to be more competitive with all other states (WA has the highest spirit tax in the nation at 20.5 percent plus $3.7708/liter). 3. Creating

the ability for all distilleries to serve cocktails from their tasting room.

Three strategic initiatives have been launched: 1. Hiring an executive director.

1. Creating a standard license for all

favorable federal and state regulations. The Guild welcomes licensed distilleries as full members, and offers an associate membership for supporting businesses looking to network with our members. The Guild also offers an enthusiast membership level for individuals with a strong interest in handcrafted spirits. The Guild’s website provides resources to member distilleries, people interested in opening new distilleries in Wisconsin, and vendors and service providers for

2. Hiring a firm to create the WA

standing meetings between the WA State Liquor and Cannabis Board and the WA Distillers Guild to discuss legislation, rule-making, compliance issues, and training opportunities.

The new board will inherit all three of these initiatives and will prioritize them as they see best serves WA distillers. Jason Parker President Copperworks Distilling Co.