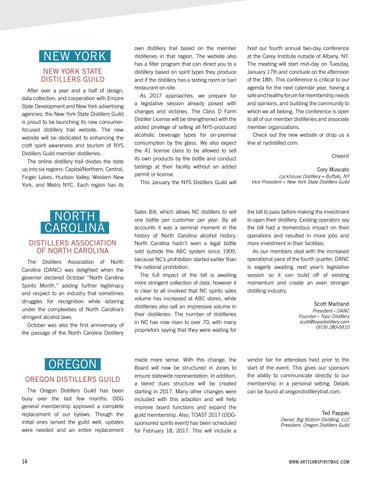 NEW YORK NEW YORK STATE DISTILLERS GUILD After over a year and a half of design, data collection, and cooperation with Empire State Development and New York advertising agencies, the New York State Distillers Guild is proud to be launching its new consumerfocused distillery trail website. The new website will be dedicated to enhancing the craft spirit awareness and tourism of NYS Distillers Guild member distilleries. The online distillery trail divides the state up into six regions: Capital/Northern, Central, Finger Lakes, Hudson Valley, Western New York, and Metro NYC. Each region has its

OREGON OREGON DISTILLERS GUILD The Oregon Distillers Guild has been busy over the last few months. ODG general membership approved a complete replacement of our bylaws. Though the initial ones served the guild well, updates were needed and an entire replacement

own distillery trail based on the member distilleries in that region. The website also has a filter program that can direct you to a distillery based on spirit types they produce and if the distillery has a tasting room or bar/ restaurant on-site. As 2017 approaches, we prepare for a legislative session already poised with changes and victories. The Class D Farm Distiller License will be strengthened with the added privilege of selling all NYS-produced alcoholic beverage types for on-premise consumption by the glass. We also expect the A1 license class to be allowed to sell its own products by the bottle and conduct tastings at their facility without an added permit or license. This January the NYS Distillers Guild will

host our fourth annual two-day conference at the Carey Institute outside of Albany, NY. The meeting will start mid-day on Tuesday, January 17th and conclude on the afternoon of the 18th. This conference is critical to our agenda for the next calendar year, having a safe and healthy forum for membership needs and opinions, and building the community to which we all belong. The conference is open to all of our member distilleries and associate member organizations. Check out the new website or drop us a line at nydistilled.com.

Sales Bill, which allows NC distillers to sell one bottle per customer per year. By all accounts it was a seminal moment in the history of North Carolina alcohol history. North Carolina hadn’t seen a legal bottle sold outside the ABC system since 1909, because NC’s prohibition started earlier than the national prohibition. The full impact of the bill is awaiting more stringent collection of data, however it is clear to all involved that NC spirits sales volume has increased at ABC stores, while distilleries also sell an impressive volume in their distilleries. The number of distilleries in NC has now risen to over 70, with many proprietors saying that they were waiting for

the bill to pass before making the investment to open their distillery. Existing operators say the bill had a tremendous impact on their operations and resulted in more jobs and more investment in their facilities. As our members deal with the increased operational pace of the fourth quarter, DANC is eagerly awaiting next year’s legislative session so it can build off of existing momentum and create an even stronger distilling industry.

made more sense. With this change, the Board will now be structured in zones to ensure statewide representation. In addition, a tiered dues structure will be created starting in 2017. Many other changes were included with this adaption and will help improve board functions and expand the guild membership. Also, TOAST 2017 (ODGsponsored spirits event) has been scheduled for February 18, 2017. This will include a

vendor fair for attendees held prior to the start of the event. This gives our sponsors the ability to communicate directly to our membership in a personal setting. Details can be found at oregondistillerytrail.com.