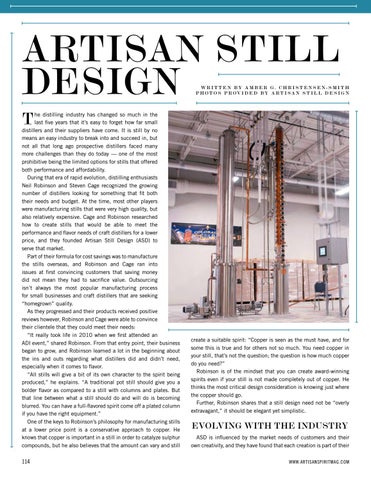 he distilling industry has changed so much in the last five years that it’s easy to forget how far small distillers and their suppliers have come. It is still by no means an easy industry to break into and succeed in, but not all that long ago prospective distillers faced many more challenges than they do today — one of the most prohibitive being the limited options for stills that offered both performance and affordability. During that era of rapid evolution, distilling enthusiasts Neil Robinson and Steven Cage recognized the growing number of distillers looking for something that fit both their needs and budget. At the time, most other players were manufacturing stills that were very high quality, but also relatively expensive. Cage and Robinson researched how to create stills that would be able to meet the performance and flavor needs of craft distillers for a lower price, and they founded Artisan Still Design (ASD) to serve that market. Part of their formula for cost savings was to manufacture the stills overseas, and Robinson and Cage ran into issues at first convincing customers that saving money did not mean they had to sacrifice value. Outsourcing isn’t always the most popular manufacturing process for small businesses and craft distillers that are seeking “homegrown” quality. As they progressed and their products received positive reviews however, Robinson and Cage were able to convince their clientele that they could meet their needs: “It really took life in 2010 when we first attended an ADI event,” shared Robinson. From that entry point, their business began to grow, and Robinson learned a lot in the beginning about the ins and outs regarding what distillers did and didn’t need, especially when it comes to flavor. “All stills will give a bit of its own character to the spirit being produced,” he explains. “A traditional pot still should give you a bolder flavor as compared to a still with columns and plates. But that line between what a still should do and will do is becoming blurred. You can have a full-flavored spirit come off a plated column if you have the right equipment.” One of the keys to Robinson’s philosophy for manufacturing stills at a lower price point is a conservative approach to copper. He knows that copper is important in a still in order to catalyze sulphur compounds, but he also believes that the amount can vary and still

create a suitable spirit: “Copper is seen as the must have, and for some this is true and for others not so much. You need copper in your still, that’s not the question; the question is how much copper do you need?” Robinson is of the mindset that you can create award-winning spirits even if your still is not made completely out of copper. He thinks the most critical design consideration is knowing just where the copper should go. Further, Robinson shares that a still design need not be “overly extravagant,” it should be elegant yet simplistic.

EVOLVING WITH THE INDUSTRY ASD is influenced by the market needs of customers and their own creativity, and they have found that each creation is part of their WWW.ARTISANSPIRITMAG.COM