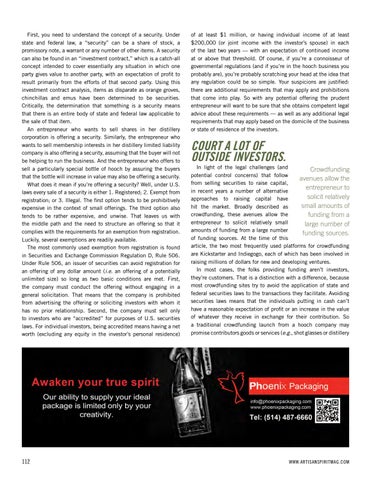 First, you need to understand the concept of a security. Under state and federal law, a “security” can be a share of stock, a promissory note, a warrant or any number of other items. A security can also be found in an “investment contract,” which is a catch-all concept intended to cover essentially any situation in which one party gives value to another party, with an expectation of profit to result primarily from the efforts of that second party. Using this investment contract analysis, items as disparate as orange groves, chinchillas and emus have been determined to be securities. Critically, the determination that something is a security means that there is an entire body of state and federal law applicable to the sale of that item. An entrepreneur who wants to sell shares in her distillery corporation is offering a security. Similarly, the entrepreneur who wants to sell membership interests in her distillery limited liability company is also offering a security, assuming that the buyer will not be helping to run the business. And the entrepreneur who offers to sell a particularly special bottle of hooch by assuring the buyers that the bottle will increase in value may also be offering a security. What does it mean if you’re offering a security? Well, under U.S. laws every sale of a security is either 1. Registered; 2. Exempt from registration; or 3. Illegal. The first option tends to be prohibitively expensive in the context of small offerings. The third option also tends to be rather expensive, and unwise. That leaves us with the middle path and the need to structure an offering so that it complies with the requirements for an exemption from registration. Luckily, several exemptions are readily available. The most commonly used exemption from registration is found in Securities and Exchange Commission Regulation D, Rule 506. Under Rule 506, an issuer of securities can avoid registration for an offering of any dollar amount (i.e. an offering of a potentially unlimited size) so long as two basic conditions are met. First, the company must conduct the offering without engaging in a general solicitation. That means that the company is prohibited from advertising the offering or soliciting investors with whom it has no prior relationship. Second, the company must sell only to investors who are “accredited” for purposes of U.S. securities laws. For individual investors, being accredited means having a net worth (excluding any equity in the investor’s personal residence)

of at least $1 million, or having individual income of at least $200,000 (or joint income with the investor’s spouse) in each of the last two years — with an expectation of continued income at or above that threshold. Of course, if you’re a connoisseur of governmental regulations (and if you’re in the hooch business you probably are), you’re probably scratching your head at the idea that any regulation could be so simple. Your suspicions are justified: there are additional requirements that may apply and prohibitions that come into play. So with any potential offering the prudent entrepreneur will want to be sure that she obtains competent legal advice about these requirements — as well as any additional legal requirements that may apply based on the domicile of the business or state of residence of the investors.

COURT A LOT OF OUTSIDE INVESTORS.

In light of the legal challenges (and Crowdfunding potential control concerns) that follow avenues allow the from selling securities to raise capital, entrepreneur to in recent years a number of alternative solicit relatively approaches to raising capital have small amounts of hit the market. Broadly described as crowdfunding, these avenues allow the funding from a entrepreneur to solicit relatively small large number of amounts of funding from a large number funding sources. of funding sources. At the time of this article, the two most frequently used platforms for crowdfunding are Kickstarter and Indiegogo, each of which has been involved in raising millions of dollars for new and developing ventures. In most cases, the folks providing funding aren’t investors, they’re customers. That is a distinction with a difference, because most crowdfunding sites try to avoid the application of state and federal securities laws to the transactions they facilitate. Avoiding securities laws means that the individuals putting in cash can’t have a reasonable expectation of profit or an increase in the value of whatever they receive in exchange for their contribution. So a traditional crowdfunding launch from a hooch company may promise contributors goods or services (e.g., shot glasses or distillery