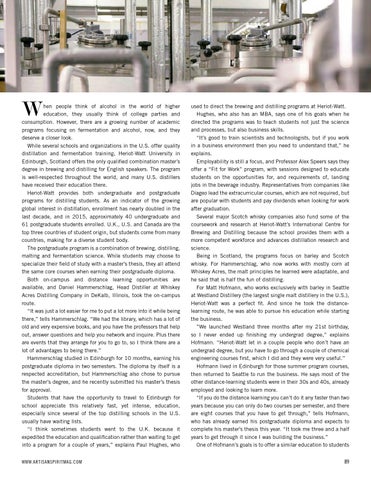 hen people think of alcohol in the world of higher education, they usually think of college parties and consumption. However, there are a growing number of academic programs focusing on fermentation and alcohol, now, and they deserve a closer look. While several schools and organizations in the U.S. offer quality distillation and fermentation training, Heriot-Watt University in Edinburgh, Scotland offers the only qualified combination master’s degree in brewing and distilling for English speakers. The program is well-respected throughout the world, and many U.S. distillers have received their education there. Heriot-Watt provides both undergraduate and postgraduate programs for distilling students. As an indicator of the growing global interest in distillation, enrollment has nearly doubled in the last decade, and in 2015, approximately 40 undergraduate and 61 postgraduate students enrolled. U.K., U.S. and Canada are the top three countries of student origin, but students come from many countries, making for a diverse student body. The postgraduate program is a combination of brewing, distilling, malting and fermentation science. While students may choose to specialize their field of study with a master’s thesis, they all attend the same core courses when earning their postgraduate diploma. Both on-campus and distance learning opportunities are available, and Daniel Hammerschlag, Head Distiller at Whiskey Acres Distilling Company in DeKalb, Illinois, took the on-campus route. “It was just a lot easier for me to put a lot more into it while being there,” tells Hammerschlag. “We had the library, which has a lot of old and very expensive books, and you have the professors that help out, answer questions and help you network and inquire. Plus there are events that they arrange for you to go to, so I think there are a lot of advantages to being there.” Hammerschlag studied in Edinburgh for 10 months, earning his postgraduate diploma in two semesters. The diploma by itself is a respected accreditation, but Hammerschlag also chose to pursue the master’s degree, and he recently submitted his master’s thesis for approval. Students that have the opportunity to travel to Edinburgh for school appreciate this relatively fast, yet intense, education, especially since several of the top distilling schools in the U.S. usually have waiting lists. “I think sometimes students went to the U.K. because it expedited the education and qualification rather than waiting to get into a program for a couple of years,” explains Paul Hughes, who

used to direct the brewing and distilling programs at Heriot-Watt. Hughes, who also has an MBA, says one of his goals when he directed the programs was to teach students not just the science and processes, but also business skills. “It’s good to train scientists and technologists, but if you work in a business environment then you need to understand that,” he explains. Employability is still a focus, and Professor Alex Speers says they offer a “Fit for Work” program, with sessions designed to educate students on the opportunities for, and requirements of, landing jobs in the beverage industry. Representatives from companies like Diageo lead the extracurricular courses, which are not required, but are popular with students and pay dividends when looking for work after graduation. Several major Scotch whisky companies also fund some of the coursework and research at Heriot-Watt’s International Centre for Brewing and Distilling because the school provides them with a more competent workforce and advances distillation research and science. Being in Scotland, the programs focus on barley and Scotch whisky. For Hammerschlag, who now works with mostly corn at Whiskey Acres, the malt principles he learned were adaptable, and he said that is half the fun of distilling. For Matt Hofmann, who works exclusively with barley in Seattle at Westland Distillery (the largest single malt distillery in the U.S.), Heriot-Watt was a perfect fit. And since he took the distancelearning route, he was able to pursue his education while starting the business. ”We launched Westland three months after my 21st birthday, so I never ended up finishing my undergrad degree,” explains Hofmann. “Heriot-Watt let in a couple people who don’t have an undergrad degree, but you have to go through a couple of chemical engineering courses first, which I did and they were very useful.” Hofmann lived in Edinburgh for those summer program courses, then returned to Seattle to run the business. He says most of the other distance-learning students were in their 30s and 40s, already employed and looking to learn more. “If you do the distance learning you can’t do it any faster than two years because you can only do two courses per semester, and there are eight courses that you have to get through,” tells Hofmann, who has already earned his postgraduate diploma and expects to complete his master’s thesis this year. “It took me three and a half years to get through it since I was building the business.” One of Hofmann’s goals is to offer a similar education to students