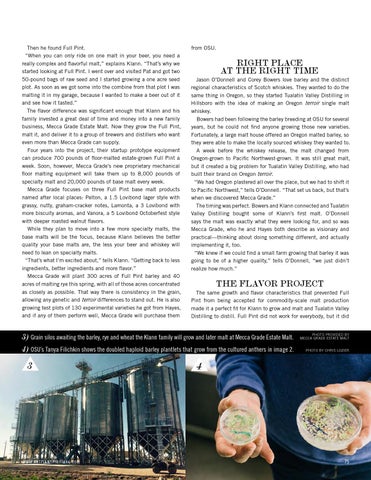 Then he found Full Pint. “When you can only ride on one malt in your beer, you need a really complex and flavorful malt,” explains Klann. “That’s why we started looking at Full Pint. I went over and visited Pat and got two 50-pound bags of raw seed and I started growing a one acre seed plot. As soon as we got some into the combine from that plot I was malting it in my garage, because I wanted to make a beer out of it and see how it tasted.” The flavor difference was significant enough that Klann and his family invested a great deal of time and money into a new family business, Mecca Grade Estate Malt. Now they grow the Full Pint, malt it, and deliver it to a group of brewers and distillers who want even more than Mecca Grade can supply. Four years into the project, their startup prototype equipment can produce 700 pounds of floor-malted estate-grown Full Pint a week. Soon, however, Mecca Grade’s new proprietary mechanical floor malting equipment will take them up to 8,000 pounds of specialty malt and 20,000 pounds of base malt every week. Mecca Grade focuses on three Full Pint base malt products named after local places: Pelton, a 1.5 Lovibond lager style with grassy, nutty, graham-cracker notes, Lamonta, a 3 Lovibond with more biscuity aromas, and Vanora, a 5 Lovibond Octoberfest style with deeper roasted walnut flavors. While they plan to move into a few more specialty malts, the base malts will be the focus, because Klann believes the better quality your base malts are, the less your beer and whiskey will need to lean on specialty malts. “That’s what I’m excited about,” tells Klann. “Getting back to less ingredients, better ingredients and more flavor.” Mecca Grade will plant 300 acres of Full Pint barley and 40 acres of malting rye this spring, with all of those acres concentrated as closely as possible. That way there is consistency in the grain, allowing any genetic and terroir differences to stand out. He is also growing test plots of 130 experimental varieties he got from Hayes, and if any of them perform well, Mecca Grade will purchase them

RIGHT PLACE AT THE RIGHT TIME Jason O’Donnell and Corey Bowers love barley and the distinct regional characteristics of Scotch whiskies. They wanted to do the same thing in Oregon, so they started Tualatin Valley Distilling in Hillsboro with the idea of making an Oregon terroir single malt whiskey. Bowers had been following the barley breeding at OSU for several years, but he could not find anyone growing those new varieties. Fortunately, a large malt house offered an Oregon malted barley, so they were able to make the locally sourced whiskey they wanted to. A week before the whiskey release, the malt changed from Oregon-grown to Pacific Northwest-grown. It was still great malt, but it created a big problem for Tualatin Valley Distilling, who had built their brand on Oregon terroir. “We had Oregon plastered all over the place, but we had to shift it to Pacific Northwest,” tells O’Donnell. “That set us back, but that’s when we discovered Mecca Grade.” The timing was perfect. Bowers and Klann connected and Tualatin Valley Distilling bought some of Klann’s first malt. O’Donnell says the malt was exactly what they were looking for, and so was Mecca Grade, who he and Hayes both describe as visionary and practical—thinking about doing something different, and actually implementing it, too. “We knew if we could find a small farm growing that barley it was going to be of a higher quality,” tells O’Donnell, “we just didn’t realize how much.”

THE FLAVOR PROJECT The same growth and flavor characteristics that prevented Full Pint from being accepted for commodity-scale malt production made it a perfect fit for Klann to grow and malt and Tualatin Valley Distilling to distill. Full Pint did not work for everybody, but it did