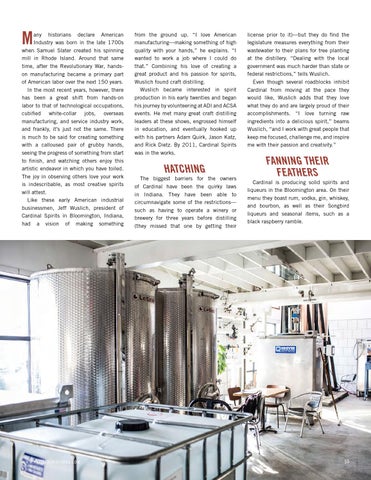 any historians declare American Industry was born in the late 1700s when Samuel Slater created his spinning mill in Rhode Island. Around that same time, after the Revolutionary War, handson manufacturing became a primary part of American labor over the next 150 years. In the most recent years, however, there has been a great shift from hands-on labor to that of technological occupations, cubified white-collar jobs, overseas manufacturing, and service industry work, and frankly, it’s just not the same. There is much to be said for creating something with a calloused pair of grubby hands, seeing the progress of something from start to finish, and watching others enjoy this artistic endeavor in which you have toiled. The joy in observing others love your work is indescribable, as most creative spirits will attest. Like these early American industrial businessmen, Jeff Wuslich, president of Cardinal Spirits in Bloomington, Indiana, had a vision of making something

from the ground up. “I love American manufacturing—making something of high quality with your hands,” he explains. “I wanted to work a job where I could do that.” Combining his love of creating a great product and his passion for spirits, Wuslich found craft distilling. Wuslich became interested in spirit production in his early twenties and began his journey by volunteering at ADI and ACSA events. He met many great craft distilling leaders at these shows, engrossed himself in education, and eventually hooked up with his partners Adam Quirk, Jason Katz, and Rick Dietz. By 2011, Cardinal Spirits was in the works.

The biggest barriers for the owners of Cardinal have been the quirky laws in Indiana. They have been able to circumnavigate some of the restrictions— such as having to operate a winery or brewery for three years before distilling (they missed that one by getting their

license prior to it)—but they do find the legislature measures everything from their wastewater to their plans for tree planting at the distillery. “Dealing with the local government was much harder than state or federal restrictions,” tells Wuslich. Even though several roadblocks inhibit Cardinal from moving at the pace they would like, Wuslich adds that they love what they do and are largely proud of their accomplishments. “I love turning raw ingredients into a delicious spirit,” beams Wuslich, “and I work with great people that keep me focused, challenge me, and inspire me with their passion and creativity.”

Cardinal is producing solid spirits and liqueurs in the Bloomington area. On their menu they boast rum, vodka, gin, whiskey, and bourbon, as well as their Songbird liqueurs and seasonal items, such as a black raspberry ramble.