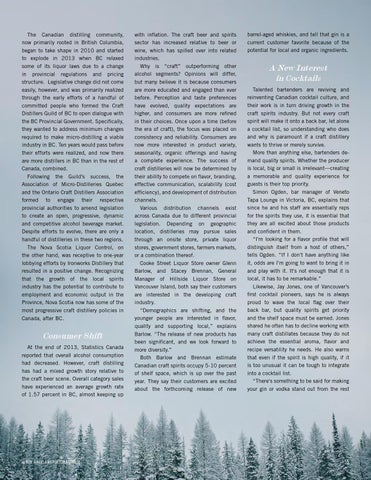 The Canadian distilling community, now primarily rooted in British Columbia, began to take shape in 2010 and started to explode in 2013 when BC relaxed some of its liquor laws due to a change in provincial regulations and pricing structure. Legislative change did not come easily, however, and was primarily realized through the early efforts of a handful of committed people who formed the Craft Distillers Guild of BC to open dialogue with the BC Provincial Government. Specifically, they wanted to address minimum changes required to make micro-distilling a viable industry in BC. Ten years would pass before their efforts were realized, and now there are more distillers in BC than in the rest of Canada, combined. Following the Guild’s success, the Association of Micro-Distilleries Quebec and the Ontario Craft Distillers Association formed to engage their respective provincial authorities to amend legislation to create an open, progressive, dynamic and competitive alcohol beverage market. Despite efforts to evolve, there are only a handful of distilleries in these two regions. The Nova Scotia Liquor Control, on the other hand, was receptive to one-year lobbying efforts by Ironworks Distillery that resulted in a positive change. Recognizing that the growth of the local spirits industry has the potential to contribute to employment and economic output in the Province, Nova Scotia now has some of the most progressive craft distillery policies in Canada, after BC.

Consumer Shift At the end of 2013, Statistics Canada reported that overall alcohol consumption had decreased. However, craft distilling has had a mixed growth story relative to the craft beer scene. Overall category sales have experienced an average growth rate of 1.57 percent in BC, almost keeping up

with inflation. The craft beer and spirits sector has increased relative to beer or wine, which has spilled over into related industries. Why is “craft” outperforming other alcohol segments? Opinions will differ, but many believe it is because consumers are more educated and engaged than ever before. Perception and taste preferences have evolved, quality expectations are higher, and consumers are more refined in their choices. Once upon a time (before the era of craft), the focus was placed on consistency and reliability. Consumers are now more interested in product variety, seasonality, organic offerings and having a complete experience. The success of craft distilleries will now be determined by their ability to compete on flavor, branding, effective communication, scalability (cost efficiency), and development of distribution channels. Various distribution channels exist across Canada due to different provincial legislation. Depending on geographic location, distilleries may pursue sales through an onsite store, private liquor stores, government stores, farmers markets, or a combination thereof. Cooke Street Liquor Store owner Glenn Barlow, and Stacey Brennan, General Manager of Hillside Liquor Store on Vancouver Island, both say their customers are interested in the developing craft industry. “Demographics are shifting, and the younger people are interested in flavor, quality and supporting local,” explains Barlow. “The release of new products has been significant, and we look forward to more diversity.” Both Barlow and Brennan estimate Canadian craft spirits occupy 5-10 percent of shelf space, which is up over the past year. They say their customers are excited about the forthcoming release of new

barrel-aged whiskies, and tell that gin is a current customer favorite because of the potential for local and organic ingredients.

A New Interest in Cocktails Talented bartenders are reviving and reinventing Canadian cocktail culture, and their work is in turn driving growth in the craft spirits industry. But not every craft spirit will make it onto a back bar, let alone a cocktail list, so understanding who does and why is paramount if a craft distillery wants to thrive or merely survive. More than anything else, bartenders demand quality spirits. Whether the producer is local, big or small is irrelevant—creating a memorable and quality experience for guests is their top priority. Simon Ogden, bar manager of Veneto Tapa Lounge in Victoria, BC, explains that since he and his staff are essentially reps for the spirits they use, it is essential that they are all excited about those products and confident in them. “I&#39;m looking for a flavor profile that will distinguish itself from a host of others,” tells Ogden. “If I don&#39;t have anything like it, odds are I&#39;m going to want to bring it in and play with it. It&#39;s not enough that it is local, it has to be remarkable.” Likewise, Jay Jones, one of Vancouver’s first cocktail pioneers, says he is always proud to wave the local flag over their back bar, but quality spirits get priority and the shelf space must be earned. Jones shared he often has to decline working with many craft distillates because they do not achieve the essential aroma, flavor and recipe versatility he needs. He also warns that even if the spirit is high quality, if it is too unusual it can be tough to integrate into a cocktail list. “There&#39;s something to be said for making your gin or vodka stand out from the rest