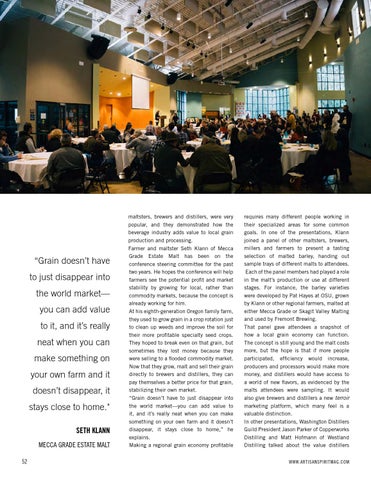 “Grain doesn’t have to just disappear into the world market— you can add value to it, and it’s really neat when you can make something on your own farm and it doesn’t disappear, it stays close to home.&quot; SETH KLANN MECCA GRADE ESTATE MALT 52

maltsters, brewers and distillers, were very popular, and they demonstrated how the beverage industry adds value to local grain production and processing. Farmer and maltster Seth Klann of Mecca Grade Estate Malt has been on the conference steering committee for the past two years. He hopes the conference will help farmers see the potential profit and market stability by growing for local, rather than commodity markets, because the concept is already working for him. At his eighth-generation Oregon family farm, they used to grow grain in a crop rotation just to clean up weeds and improve the soil for their more profitable specialty seed crops. They hoped to break even on that grain, but sometimes they lost money because they were selling to a flooded commodity market. Now that they grow, malt and sell their grain directly to brewers and distillers, they can pay themselves a better price for that grain, stabilizing their own market. “Grain doesn’t have to just disappear into the world market—you can add value to it, and it’s really neat when you can make something on your own farm and it doesn’t disappear, it stays close to home,” he explains. Making a regional grain economy profitable

requires many different people working in their specialized areas for some common goals. In one of the presentations, Klann joined a panel of other maltsters, brewers, millers and farmers to present a tasting selection of malted barley, handing out sample trays of different malts to attendees. Each of the panel members had played a role in the malt’s production or use at different stages. For instance, the barley varieties were developed by Pat Hayes at OSU, grown by Klann or other regional farmers, malted at either Mecca Grade or Skagit Valley Malting and used by Fremont Brewing. That panel gave attendees a snapshot of how a local grain economy can function. The concept is still young and the malt costs more, but the hope is that if more people participated, efficiency would increase, producers and processors would make more money, and distillers would have access to a world of new flavors, as evidenced by the malts attendees were sampling. It would also give brewers and distillers a new terroir marketing platform, which many feel is a valuable distinction. In other presentations, Washington Distillers Guild President Jason Parker of Copperworks Distilling and Matt Hofmann of Westland Distilling talked about the value distillers WWW.ARTISANSPIRITMAG.COM