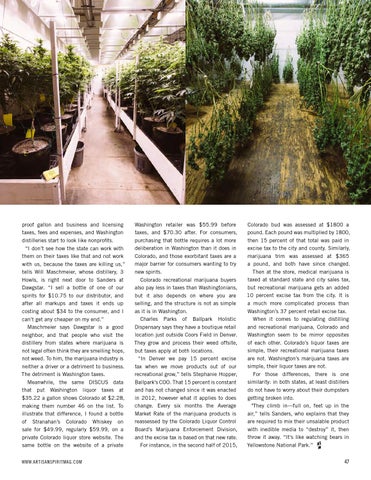 proof gallon and business and licensing taxes, fees and expenses, and Washington distilleries start to look like nonprofits. “I don’t see how the state can work with them on their taxes like that and not work with us, because the taxes are killing us,” tells Will Maschmeier, whose distillery, 3 Howls, is right next door to Sanders at Dawgstar. “I sell a bottle of one of our spirits for $10.75 to our distributor, and after all markups and taxes it ends up costing about $34 to the consumer, and I can’t get any cheaper on my end.” Maschmeier says Dawgstar is a good neighbor, and that people who visit the distillery from states where marijuana is not legal often think they are smelling hops, not weed. To him, the marijuana industry is neither a driver or a detriment to business. The detriment is Washington taxes. Meanwhile, the same DISCUS data that put Washington liquor taxes at $35.22 a gallon shows Colorado at $2.28, making them number 46 on the list. To illustrate that difference, I found a bottle of Stranahan’s Colorado Whiskey on sale for $49.99, regularly $59.99, on a private Colorado liquor store website. The same bottle on the website of a private WWW.ARTISANSPIRITMAG.COM

Washington retailer was $55.99 before taxes, and $70.30 after. For consumers, purchasing that bottle requires a lot more deliberation in Washington than it does in Colorado, and those exorbitant taxes are a major barrier for consumers wanting to try new spirits. Colorado recreational marijuana buyers also pay less in taxes than Washingtonians, but it also depends on where you are selling, and the structure is not as simple as it is in Washington. Charles Parks of Ballpark Holistic Dispensary says they have a boutique retail location just outside Coors Field in Denver. They grow and process their weed offsite, but taxes apply at both locations. “In Denver we pay 15 percent excise tax when we move products out of our recreational grow,” tells Stephanie Hopper, Ballpark’s COO. That 15 percent is constant and has not changed since it was enacted in 2012, however what it applies to does change. Every six months the Average Market Rate of the marijuana products is reassessed by the Colorado Liquor Control Board’s Marijuana Enforcement Division, and the excise tax is based on that new rate. For instance, in the second half of 2015,

Colorado bud was assessed at $1800 a pound. Each pound was multiplied by 1800, then 15 percent of that total was paid in excise tax to the city and county. Similarly, marijuana trim was assessed at $365 a pound, and both have since changed. Then at the store, medical marijuana is taxed at standard state and city sales tax, but recreational marijuana gets an added 10 percent excise tax from the city. It is a much more complicated process than Washington’s 37 percent retail excise tax. When it comes to regulating distilling and recreational marijuana, Colorado and Washington seem to be mirror opposites of each other. Colorado’s liquor taxes are simple, their recreational marijuana taxes are not. Washington’s marijuana taxes are simple, their liquor taxes are not. For those differences, there is one similarity: in both states, at least distillers do not have to worry about their dumpsters getting broken into. &quot;They climb in—full on, feet up in the air,” tells Sanders, who explains that they are required to mix their unsalable product with inedible media to “destroy” it, then throw it away. “It&#39;s like watching bears in Yellowstone National Park.”