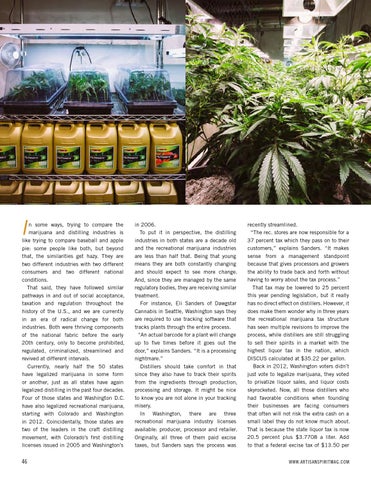 n some ways, trying to compare the marijuana and distilling industries is like trying to compare baseball and apple pie: some people like both, but beyond that, the similarities get hazy. They are two different industries with two different consumers and two different national conditions. That said, they have followed similar pathways in and out of social acceptance, taxation and regulation throughout the history of the U.S., and we are currently in an era of radical change for both industries. Both were thriving components of the national fabric before the early 20th century, only to become prohibited, regulated, criminalized, streamlined and revived at different intervals. Currently, nearly half the 50 states have legalized marijuana in some form or another, just as all states have again legalized distilling in the past four decades. Four of those states and Washington D.C. have also legalized recreational marijuana, starting with Colorado and Washington in 2012. Coincidentally, those states are two of the leaders in the craft distilling movement, with Colorado’s first distilling licenses issued in 2005 and Washington’s

in 2006. To put it in perspective, the distilling industries in both states are a decade old and the recreational marijuana industries are less than half that. Being that young means they are both constantly changing and should expect to see more change. And, since they are managed by the same regulatory bodies, they are receiving similar treatment. For instance, Eli Sanders of Dawgstar Cannabis in Seattle, Washington says they are required to use tracking software that tracks plants through the entire process. “An actual barcode for a plant will change up to five times before it goes out the door,” explains Sanders. “It is a processing nightmare.” Distillers should take comfort in that since they also have to track their spirits from the ingredients through production, processing and storage. It might be nice to know you are not alone in your tracking misery. In Washington, there are three recreational marijuana industry licenses available: producer, processor and retailer. Originally, all three of them paid excise taxes, but Sanders says the process was

recently streamlined. “The rec. stores are now responsible for a 37 percent tax which they pass on to their customers,” explains Sanders. “It makes sense from a management standpoint because that gives processors and growers the ability to trade back and forth without having to worry about the tax process.” That tax may be lowered to 25 percent this year pending legislation, but it really has no direct effect on distillers. However, it does make them wonder why in three years the recreational marijuana tax structure has seen multiple revisions to improve the process, while distillers are still struggling to sell their spirits in a market with the highest liquor tax in the nation, which DISCUS calculated at $35.22 per gallon. Back in 2012, Washington voters didn’t just vote to legalize marijuana, they voted to privatize liquor sales, and liquor costs skyrocketed. Now, all those distillers who had favorable conditions when founding their businesses are facing consumers that often will not risk the extra cash on a small label they do not know much about. That is because the state liquor tax is now 20.5 percent plus $3.7708 a liter. Add to that a federal excise tax of $13.50 per WWW.ARTISANSPIRITMAG.COM