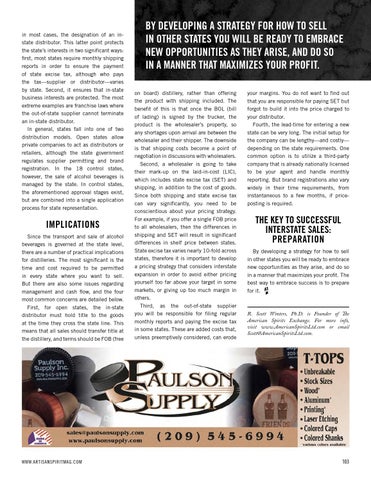 in most cases, the designation of an instate distributor. This latter point protects the state’s interests in two significant ways: first, most states require monthly shipping reports in order to ensure the payment of state excise tax, although who pays the tax—supplier or distributor—varies by state. Second, it ensures that in-state business interests are protected. The most extreme examples are franchise laws where the out-of-state supplier cannot terminate an in-state distributor. In general, states fall into one of two distribution models. Open states allow private companies to act as distributors or retailers, although the state government regulates supplier permitting and brand registration. In the 18 control states, however, the sale of alcohol beverages is managed by the state. In control states, the aforementioned approval stages exist, but are combined into a single application process for state representation.

IMPLICATIONS Since the transport and sale of alcohol beverages is governed at the state level, there are a number of practical implications for distilleries. The most significant is the time and cost required to be permitted in every state where you want to sell. But there are also some issues regarding management and cash flow, and the four most common concerns are detailed below. First, for open states, the in-state distributor must hold title to the goods at the time they cross the state line. This means that all sales should transfer title at the distillery, and terms should be FOB (free

BY DEVELOPING A STRATEGY FOR HOW TO SELL IN OTHER STATES YOU WILL BE READY TO EMBRACE NEW OPPORTUNITIES AS THEY ARISE, AND DO SO IN A MANNER THAT MAXIMIZES YOUR PROFIT. on board) distillery, rather than offering the product with shipping included. The benefit of this is that once the BOL (bill of lading) is signed by the trucker, the product is the wholesaler’s property, so any shortages upon arrival are between the wholesaler and their shipper. The downside is that shipping costs become a point of negotiation in discussions with wholesalers. Second, a wholesaler is going to take their mark-up on the laid-in-cost (LIC), which includes state excise tax (SET) and shipping, in addition to the cost of goods. Since both shipping and state excise tax can vary significantly, you need to be conscientious about your pricing strategy. For example, if you offer a single FOB price to all wholesalers, then the differences in shipping and SET will result in significant differences in shelf price between states. State excise tax varies nearly 10-fold across states, therefore it is important to develop a pricing strategy that considers interstate expansion in order to avoid either pricing yourself too far above your target in some markets, or giving up too much margin in others. Third, as the out-of-state supplier you will be responsible for filing regular monthly reports and paying the excise tax in some states. These are added costs that, unless preemptively considered, can erode

your margins. You do not want to find out that you are responsible for paying SET but forgot to build it into the price charged to your distributor. Fourth, the lead-time for entering a new state can be very long. The initial setup for the company can be lengthy—and costly— depending on the state requirements. One common option is to utilize a third-party company that is already nationally licensed to be your agent and handle monthly reporting. But brand registrations also vary widely in their time requirements, from instantaneous to a few months, if priceposting is required.

THE KEY TO SUCCESSFUL INTERSTATE SALES: PREPARATION By developing a strategy for how to sell in other states you will be ready to embrace new opportunities as they arise, and do so in a manner that maximizes your profit. The best way to embrace success is to prepare for it.