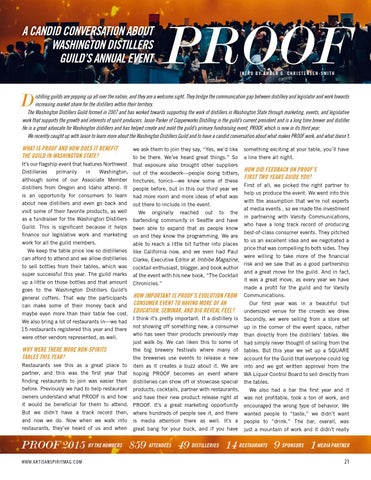 istilling guilds are popping up all over the nation, and they are a welcome sight. They bridge the communication gap between distillery and legislator and work towards increasing market share for the distillers within their territory. The Washington Distillers Guild formed in 2007 and has worked towards supporting the work of distillers in Washington State through marketing, events, and legislative work that supports the growth and interests of spirit producers. Jason Parker of Copperworks Distilling is the guild’s current president and is a long time brewer and distiller. He is a great advocate for Washington distillers and has helped create and mold the guild’s primary fundraising event, PROOF, which is now in its third year. We recently caught up with Jason to learn more about the Washington Distillers Guild and to have a candid conversation about what makes PROOF work, and what doesn’t.

WHAT IS PROOF AND HOW DOES IT BENEFIT THE GUILD IN WASHINGTON STATE?

we ask them to join they say, “Yes, we’d like to be there. We’ve heard great things.” So It’s our flagship event that features Northwest that exposure also brought other suppliers Distilleries primarily in Washington, out of the woodwork—people doing bitters, although some of our Associate Member tinctures, tonics—we knew some of these distillers from Oregon and Idaho attend. It people before, but in this our third year we is an opportunity for consumers to learn had more room and more ideas of what was about new distillers and even go back and out there to include in the event. visit some of their favorite products, as well We originally reached out to the as a fundraiser for the Washington Distillers bartending community in Seattle and have Guild. This is significant because it helps been able to expand that as people know finance our legislative work and marketing us and they know the programming. We are work for all the guild members. able to reach a little bit further into places We keep the table price low so distilleries like California now, and we even had Paul can afford to attend and we allow distilleries Clarke, Executive Editor at Imbibe Magazine, to sell bottles from their tables, which was cocktail enthusiast, blogger, and book author super successful this year. The guild marks at the event with his new book, “The Cocktail up a little on those bottles and that amount Chronicles.” goes to the Washington Distillers Guild’s general coffers. That way the participants HOW IMPORTANT IS PROOF’S EVOLUTION FROM can make some of their money back and CONSUMER EVENT TO HAVING MORE OF AN EDUCATION, SEMINAR, AND BIG REVEAL FEEL? maybe even more than their table fee cost. I think it’s pretty important. If a distillery is We also bring a lot of restaurants in—we had not showing off something new, a consumer 15 restaurants registered this year and there who has seen their products previously may were other vendors represented, as well. just walk by. We can liken this to some of the big brewery festivals where many of WHY WERE THERE MORE NON-SPIRITS TABLES THIS YEAR? the breweries use events to release a new Restaurants see this as a great place to item as it creates a buzz about it. We are partner, and this was the first year that hoping PROOF becomes an event where finding restaurants to join was easier than distilleries can show off or showcase special before. Previously we had to help restaurant products, cocktails, partner with restaurants, owners understand what PROOF is and how and have their new product release right at it would be beneficial for them to attend. PROOF. It’s a great marketing opportunity But we didn’t have a track record then, where hundreds of people see it, and there and now we do. Now when we walk into is media attention there as well. It’s a restaurants, they’ve heard of us and when great bang for your buck, and if you have

something exciting at your table, you’ll have a line there all night.

HOW DID FEEDBACK ON PROOF’S FIRST TWO YEARS GUIDE YOU? First of all, we picked the right partner to help us produce the event. We went into this with the assumption that we’re not experts at media events , so we made the investment in partnering with Varsity Communications, who have a long track record of producing best-of-class consumer events. They pitched to us an excellent idea and we negotiated a price that was compelling to both sides. They were willing to take more of the financial risk and we saw that as a good partnership and a great move for the guild. And in fact, it was a great move, as every year we have made a profit for the guild and for Varsity Communications. Our first year was in a beautiful but undersized venue for the crowds we drew. Secondly, we were selling from a store set up in the corner of the event space, rather than directly from the distillers’ tables. We had simply never thought of selling from the tables. But this year we set up a SQUARE account for the Guild that everyone could log into and we got written approval from the WA Liquor Control Board to sell directly from the tables. We also had a bar the first year and it was not profitable, took a ton of work, and encouraged the wrong type of behavior. We wanted people to “taste,” we didn’t want people to “drink.” The bar, overall, was just a mountain of work and it didn’t really