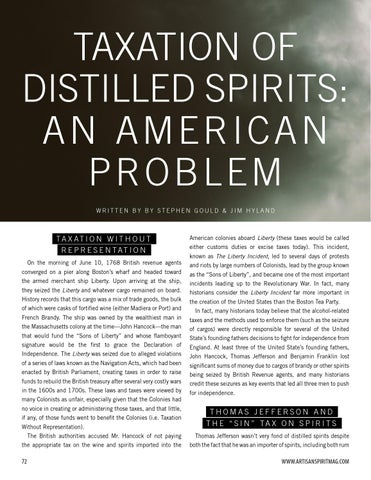 either customs duties or excise taxes today). This incident,

On the morning of June 10, 1768 British revenue agents

and riots by large numbers of Colonists, lead by the group known

converged on a pier along Boston’s wharf and headed toward the armed merchant ship Liberty. Upon arriving at the ship, they seized the Liberty and whatever cargo remained on board. History records that this cargo was a mix of trade goods, the bulk of which were casks of fortified wine (either Madiera or Port) and French Brandy. The ship was owned by the wealthiest man in the Massachusetts colony at the time—John Hancock—the man that would fund the “Sons of Liberty” and whose flamboyant signature would be the first to grace the Declaration of Independence. The Liberty was seized due to alleged violations of a series of laws known as the Navigation Acts, which had been enacted by British Parliament, creating taxes in order to raise funds to rebuild the British treasury after several very costly wars in the 1600s and 1700s. These laws and taxes were viewed by many Colonists as unfair, especially given that the Colonies had no voice in creating or administering those taxes, and that little, if any, of those funds went to benefit the Colonies (i.e. Taxation Without Representation).

American colonies aboard Liberty (these taxes would be called known as The Liberty Incident, led to several days of protests as the “Sons of Liberty”, and became one of the most important incidents leading up to the Revolutionary War. In fact, many historians consider the Liberty Incident far more important in the creation of the United States than the Boston Tea Party. In fact, many historians today believe that the alcohol-related taxes and the methods used to enforce them (such as the seizure of cargos) were directly responsible for several of the United State’s founding fathers decisions to fight for independence from England. At least three of the United State’s founding fathers, John Hancock, Thomas Jefferson and Benjamin Franklin lost significant sums of money due to cargos of brandy or other spirits being seized by British Revenue agents, and many historians credit these seizures as key events that led all three men to push for independence.

The British authorities accused Mr. Hancock of not paying

the appropriate tax on the wine and spirits imported into the

both the fact that he was an importer of spirits, including both rum