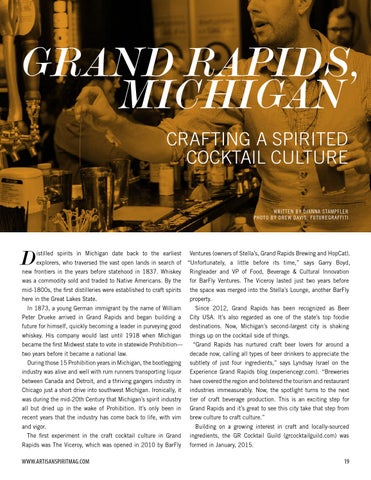 istilled spirits in Michigan date back to the earliest

explorers, who traversed the vast open lands in search of

“Unfortunately, a little before its time,” says Garry Boyd,

new frontiers in the years before statehood in 1837. Whiskey

was a commodity sold and traded to Native Americans. By the

for BarFly Ventures. The Viceroy lasted just two years before

mid-1800s, the first distilleries were established to craft spirits

the space was merged into the Stella’s Lounge, another BarFly

here in the Great Lakes State.

In 1873, a young German immigrant by the name of William

Since 2012, Grand Rapids has been recognized as Beer

Peter Drueke arrived in Grand Rapids and began building a

City USA. It’s also regarded as one of the state’s top foodie

future for himself, quickly becoming a leader in purveying good

whiskey. His company would last until 1918 when Michigan

things up on the cocktail side of things.

became the first Midwest state to vote in statewide Prohibition— two years before it became a national law.

“Grand Rapids has nurtured craft beer lovers for around a decade now, calling all types of beer drinkers to appreciate the

During those 15 Prohibition years in Michigan, the bootlegging

subtlety of just four ingredients,” says Lyndsay Israel on the

industry was alive and well with rum runners transporting liquor

between Canada and Detroit, and a thriving gangers industry in

have covered the region and bolstered the tourism and restaurant

Chicago just a short drive into southwest Michigan. Ironically, it

industries immeasurably. Now, the spotlight turns to the next

was during the mid-20th Century that Michigan’s spirit industry

tier of craft beverage production. This is an exciting step for

all but dried up in the wake of Prohibition. It’s only been in

recent years that the industry has come back to life, with vim

and vigor. The first experiment in the craft cocktail culture in Grand Rapids was The Viceroy, which was opened in 2010 by BarFly

Building on a growing interest in craft and locally-sourced ingredients, the GR Cocktail Guild (grcocktailguild.com) was formed in January, 2015.