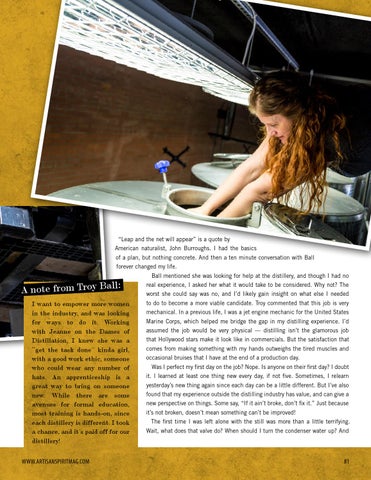 “Leap and the net will appear” is a quote by American naturalist, John Burroughs. I had the basics of a plan, but nothing concrete. And then a ten minute conversation with Ball forever changed my life.

A note from Troy Ball: I want to empower more women in the industry, and was looking for ways to do it. Working with Jeanne on the Dames of Distillation, I knew she was a “get the task done” kinda girl, with a good work ethic, someone who could wear any number of hats. An apprenticeship is a great way to bring on someone new. While there are some avenues for formal education, most training is hands-on, since each distillery is different. I took a chance, and it’s paid off for our distillery!

Ball mentioned she was looking for help at the distillery, and though I had no real experience, I asked her what it would take to be considered. Why not? The worst she could say was no, and I’d likely gain insight on what else I needed to do to become a more viable candidate. Troy commented that this job is very mechanical. In a previous life, I was a jet engine mechanic for the United States Marine Corps, which helped me bridge the gap in my distilling experience. I’d assumed the job would be very physical — distilling isn’t the glamorous job that Hollywood stars make it look like in commercials. But the satisfaction that comes from making something with my hands outweighs the tired muscles and occasional bruises that I have at the end of a production day. Was I perfect my first day on the job? Nope. Is anyone on their first day? I doubt it. I learned at least one thing new every day, if not five. Sometimes, I relearn yesterday’s new thing again since each day can be a little different. But I’ve also found that my experience outside the distilling industry has value, and can give a new perspective on things. Some say, “If it ain’t broke, don’t fix it.” Just because it’s not broken, doesn’t mean something can’t be improved! The first time I was left alone with the still was more than a little terrifying. Wait, what does that valve do? When should I turn the condenser water up? And