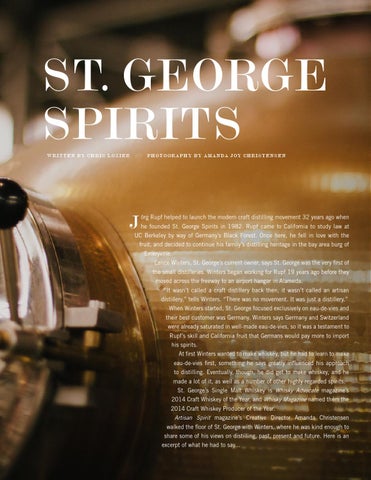 örg Rupf helped to launch the modern craft distilling movement 32 years ago when he founded St. George Spirits in 1982. Rupf came to California to study law at

UC Berkeley by way of Germany’s Black Forest. Once here, he fell in love with the fruit, and decided to continue his family’s distilling heritage in the bay area burg of Emeryville. Lance Winters, St. George’s current owner, says St. George was the very first of the small distilleries. Winters began working for Rupf 19 years ago before they moved across the freeway to an airport hangar in Alameda. “It wasn’t called a craft distillery back then, it wasn’t called an artisan distillery,” tells Winters. “There was no movement. It was just a distillery.” When Winters started, St. George focused exclusively on eau-de-vies and their best customer was Germany. Winters says Germany and Switzerland were already saturated in well-made eau-de-vies, so it was a testament to Rupf’s skill and California fruit that Germans would pay more to import his spirits. At first Winters wanted to make whiskey, but he had to learn to make eau-de-vies first, something he says greatly influenced his approach to distilling. Eventually, though, he did get to make whiskey, and he made a lot of it, as well as a number of other highly regarded spirits. St. George’s Single Malt Whiskey is Whisky Advocate magazine’s 2014 Craft Whiskey of the Year, and Whisky Magazine named them the 2014 Craft Whiskey Producer of the Year.

Artisan Spirit magazine’s Creative Director Amanda Christensen walked the floor of St. George with Winters, where he was kind enough to share some of his views on distilling, past, present and future. Here is an excerpt of what he had to say...