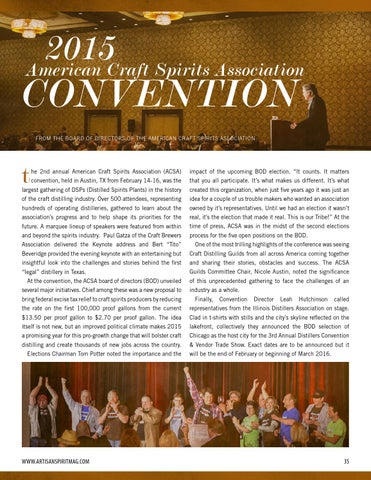 impact of the upcoming BOD election. “It counts. It matters

convention, held in Austin, TX from February 14-16, was the

that you all participate. It’s what makes us different. It’s what

largest gathering of DSPs (Distilled Spirits Plants) in the history

created this organization, when just five years ago it was just an

of the craft distilling industry. Over 500 attendees, representing

hundreds of operating distilleries, gathered to learn about the

owned by it’s representatives. Until we had an election it wasn’t

association’s progress and to help shape its priorities for the

real, it’s the election that made it real. This is our Tribe!” At the

future. A marquee lineup of speakers were featured from within

time of press, ACSA was in the midst of the second elections

and beyond the spirits industry. Paul Gatza of the Craft Brewers

process for the five open positions on the BOD.

One of the most trilling highlights of the conference was seeing

Beveridge provided the evening keynote with an entertaining but

Craft Distilling Guilds from all across America coming together

insightful look into the challenges and stories behind the first

and sharing their stories, obstacles and success. The ACSA

At the convention, the ACSA board of directors (BOD) unveiled several major initiatives. Chief among these was a new proposal to bring federal excise tax relief to craft spirits producers by reducing

of this unprecedented gathering to face the challenges of an industry as a whole. Finally,

the rate on the first 100,000 proof gallons from the current

representatives from the Illinois Distillers Association on stage.

itself is not new, but an improved political climate makes 2015

lakefront, collectively they announced the BOD selection of

Chicago as the host city for the 3rd Annual Distillers Convention

distilling and create thousands of new jobs across the country.

& Vendor Trade Show. Exact dates are to be announced but it

Elections Chairman Tom Potter noted the importance and the

will be the end of February or beginning of March 2016.