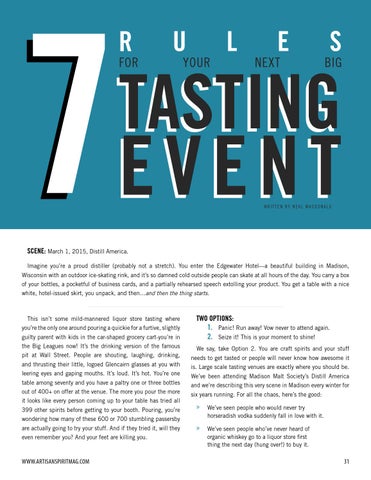 Wisconsin with an outdoor ice-skating rink, and it’s so damned cold outside people can skate at all hours of the day. You carry a box of your bottles, a pocketful of business cards, and a partially rehearsed speech extolling your product. You get a table with a nice white, hotel-issued skirt, you unpack, and then…and then the thing starts.

This isn’t some mild-mannered liquor store tasting where

you’re the only one around pouring a quickie for a furtive, slightly guilty parent with kids in the car-shaped grocery cart-you’re in the Big Leagues now! It’s the drinking version of the famous pit at Wall Street. People are shouting, laughing, drinking, and thrusting their little, logoed Glencairn glasses at you with leering eyes and gaping mouths. It’s loud. It’s hot. You’re one table among seventy and you have a paltry one or three bottles out of 400+ on offer at the venue. The more you pour the more it looks like every person coming up to your table has tried all 399 other spirits before getting to your booth. Pouring, you’re

even remember you? And your feet are killing you.

Seize it! This is your moment to shine!

We say, take Option 2. You are craft spirits and your stuff needs to get tasted or people will never know how awesome it is. Large scale tasting venues are exactly where you should be. We’ve been attending Madison Malt Society’s Distill America and we’re describing this very scene in Madison every winter for six years running. For all the chaos, here’s the good:

We’ve seen people who would never try horseradish vodka suddenly fall in love with it.

We’ve seen people who’ve never heard of organic whiskey go to a liquor store first thing the next day (hung over!) to buy it.

wondering how many of these 600 or 700 stumbling passersby are actually going to try your stuff. And if they tried it, will they