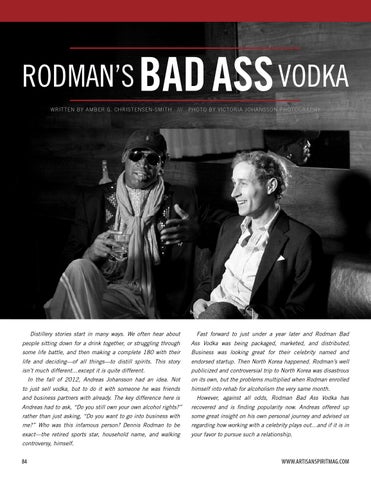 Distillery stories start in many ways. We often hear about

Fast forward to just under a year later and Rodman Bad

people sitting down for a drink together, or struggling through

Ass Vodka was being packaged, marketed, and distributed.

some life battle, and then making a complete 180 with their

Business was looking great for their celebrity named and

life and deciding—of all things—to distill spirits. This story

isn’t much different…except it is quite different.

publicized and controversial trip to North Korea was disastrous

In the fall of 2012, Andreas Johansson had an idea. Not to just sell vodka, but to do it with someone he was friends and business partners with already. The key difference here is

on its own, but the problems multiplied when Rodman enrolled himself into rehab for alcoholism the very same month. However, against all odds, Rodman Bad Ass Vodka has

Andreas had to ask, “Do you still own your own alcohol rights?”

recovered and is finding popularity now. Andreas offered up

rather than just asking, “Do you want to go into business with

some great insight on his own personal journey and advised us

me?” Who was this infamous person? Dennis Rodman to be

your favor to pursue such a relationship.