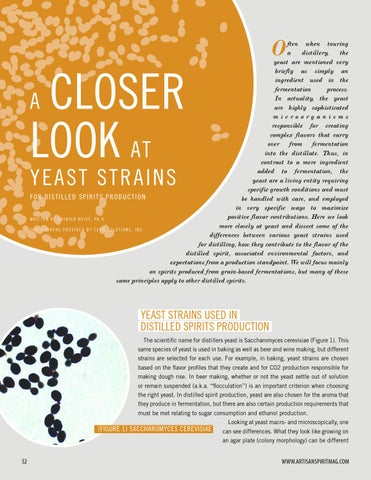 ften when touring a distillery, the yeast are mentioned very briefly as simply an ingredient used in the fermentation process. In actuality, the yeast are highly sophisticated microorganisms responsible for creating complex flavors that carry over from fermentation into the distillate. Thus, in contrast to a mere ingredient added to fermentation, the yeast are a living entity requiring specific growth conditions and must F OR D I S TI LLE D SPI RI TS PRODUCTI ON be handled with care, and employed in very specific ways to maximize positive flavor contributions. Here we look W R I T T E N B Y P AT R I C K H E I S T, P H . D more closely at yeast and dissect some of the PHOTOGRAPHS PROVIDED BY FERM SOLUTIONS, INC. differences between various yeast strains used for distilling, how they contribute to the flavor of the distilled spirit, associated environmental factors, and expectations from a production standpoint. We will focus mainly on spirits produced from grain-based fermentations, but many of these same principles apply to other distilled spirits.

CLOSER LOOK AT A

YEAST STRAINS USED IN DISTILLED SPIRITS PRODUCTION The scientific name for distillers yeast is Saccharomyces cerevisiae (Figure 1). This same species of yeast is used in baking as well as beer and wine making, but different strains are selected for each use. For example, in baking, yeast strains are chosen based on the flavor profiles that they create and for CO2 production responsible for making dough rise. In beer making, whether or not the yeast settle out of solution or remain suspended (a.k.a. “flocculation”) is an important criterion when choosing the right yeast. In distilled spirit production, yeast are also chosen for the aroma that they produce in fermentation, but there are also certain production requirements that must be met relating to sugar consumption and ethanol production.

Looking at yeast macro- and microscopically, one can see differences. What they look like growing on an agar plate (colony morphology) can be different